A New Way to Search for Tournaments 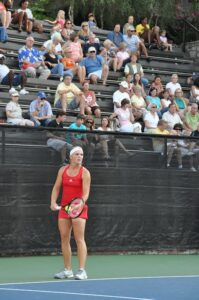 Just a few short years ago, Melanie Oudin was the darling of the tennis world when she took out top player after top player at the 2009 US Open. Her name and face were everywhere as media touted her as the Next Big Thing in US Women’s Tennis. A huge billboard in her hometown of Marietta, Georgia, featuring a larger-than-life image of Melanie loomed large over one of the suburb’s biggest throughways.

Melanie’s twin sister, Katherine, chose a different route for her tennis, playing 4 years at Furman University and majoring in Health Sciences. Even though she was equally as talented as Melanie, Katherine was focused on life after tennis from an early age and knew that college and a career in the medical field was in her future.

Sadly, injuries have kept Melanie out of the top ranks for the past several years. She’s been working hard to regain her strength and on-court prowess and will continue her comeback as she returns to her long-time home court to play in the One Love Tennis Open at Lifetime Athletic and Tennis in Peachtree Corners for this $50,000 Women’s USTA Pro Circuit event.

Oudin reached the 2009 US Open quarterfinals and rack up wins over former No. 1 Maria Sharapova and Nadia Petrova. She peaked at No. 31 on the WTA Tour and won the 2012 Birmingham tournament in England by defeating another player who was the best in the world, Jelena Jankovic. The native of Marietta, Ga., also was the 2011 U.S. Open mixed champion with Jack Sock.

Oudin will play into the main draw of the tournament that runs Sept. 11-18. In 2014, she was diagnosed with supraventricular tachycardia, a heart ailment that made her heart race up to a reported 230 beats per minute during competition. While surgeries helped diminish that condition, she also had a major hand injury last year. She began playing regularly again and has risen to 281 in the world.

In keeping with his support of college tennis, One Love Tournament Director Turhan Berne has offered a qualifying wild card to the two top college programs in the state. Johnnise Renaud, of Georgia Tech, has accepted the wild card. She was named a 2016 All-ACC first team in her sophomore year, following a 2015 All-ACC second team selection. She received an at-large bid to 2016 NCAA Singles Championship last spring after posting a 25-8 record.

Other top players in the main draw include 2012 Olympic Mixed Doubles Silver Medalist Laura Robson. Robson, from Great Britain, reached No. 27 in the world three years ago and is returning to top form after injuries. WTA No. 128 Julia Boserup, Taylor Townsend — a 20-year-old who trains and lives in the Atlanta area – and world No. 161 Sachia Vickery of Florida round out the top three Americans entered.

USTA Pro Circuit events typically are a “proving ground” for young players and a way of getting back inside the top-50 for many veteran competitors. The One Love Tennis Open is the first women’s professional tennis tournament in metro Atlanta in five years. Berne, an experienced tournament director who runs the biggest local tennis events in Atlanta, has a player’s party, clinic and Pro-Am planned for the week.