James McGee & His Quest for Success 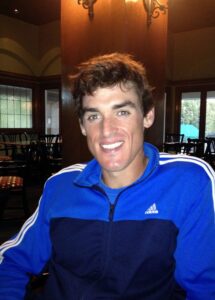 Last week, Irish pro, James McGee, was in town working with one of the coaches (Joseph O’Dwyer) at the club where my son trains. James was getting ready for the upcoming Sacramento Challenger tournament (livestreaming of the matches is online at http://www.usta.com/Pro-Tennis/Pro-Circuit/pro_circuit_live/) in Northern California where he will attempt to earn as many ATP points as possible, thereby improving his ranking and, hopefully, catching the attention of potential financial sponsors. If you’ve read any of James’s blog, you’ll understand why this is such an important piece of the puzzle.

I knew James was in town thanks to Twitter, and I immediately reached out to him to see if he would have any time to chat with me. Gracious young man that he is, he let me know his practice schedule and offered to sit down with me between sessions.

The scene: The Olde Towne Athletic Club pub, dinner-time, Dmitry Tursunov vs. Stanislas Wawrinka at the Kuala Lumpur ATP 250 event on the big screens surrounding us, James’s eyes moving between the tvs and me, 2 plates of food in front of him.

Some background info: 26-year-old James is the #1 player in Ireland and is currently ranked 246 on the ATP World Tour. He has played for the Irish Davis Cup Team but has otherwise received no financial support from the Irish Tennis Federation (the equivalent of our USTA). He travels the world by himself 70-80% of the time – no coach or family for moral support – and arranges all of his own flights, accommodations, meals, hitting/training sessions, racquet stringing, etc. While he was in Atlanta, for example, he stayed in the home of a club member and relied on the coach and public transportation (which is very limited in Atlanta!) to get around. He’s been doing this since he was 18 years old and has no intention of stopping any time soon.

I asked James about his life growing up as a tennis player in Ireland. He shared with me that his parents were probably the perfect Tennis Parents. His mom has extensive experience in the tennis world, both as a club player and a coach; his dad doesn’t play but is a big fan, especially of his son. James started playing when he was about 7 years old and quickly developed a passion for the game. However, he continued to attend regular school and viewed that as a huge advantage as it gave him something other than tennis to focus on, leaving him more well-balanced overall. As he explained, “School gave me a break from thinking about tennis. I had to concentrate on my classes, and I had the distraction of my school mates, which was a good thing. By the time my studies were completed for the day, I was so hungry to get to the courts and play!”

The only conflict James can recall having with his parents was when he announced, at the age of 17, that he was pursuing a professional tennis career. His parents were supportive of his decision, however they were concerned about him turning pro at 17 as they knew it was such a significant and important decision in his life. James simply said, “This is what I have to do,” and that was the end of the discussion. Unfortunately, a serious injury side-tracked him for more than a year, and so James did decide to give the US college system a try. Since he had been off the tour for an extended period of time and had no current results to show, the recruiting process was a challenge. James wound up at NC State where his team made a run to the quarterfinals at the 2007 NCAA Year-End Tournament in Athens, GA. Because James posted such great results during his 2 years at NC State, he was able to transition back onto the pro tour and begin anew his quest for ranking points.

Since then, his biggest struggle has been finance-related. When you’re not inside the top 100 on the men’s side, it’s tough to earn enough prize money to cover the cost of training and travel. Most players in James’s situation are constantly on the lookout for sponsors, both for equipment/clothing and for the money to keep competing on tour. If the results come, so does the money. But if a player is sidelined with an injury for any period of time, then it’s tough to convince the sponsors to keep writing those checks.

So, what keeps James on his quest? Why does he keep working and traveling?

It’s all about love of the game.

James doesn’t sugar-coat things. He flat-out told me that, yes, he would love to have a wife and a family someday. But, his current lifestyle and lack of funds prevents him from pursuing that aspect of his dreams at this time. He talked a bit about players like Rafa Nadal and Andy Murray and Novak Djokovic who are at the top of the game, who can afford to take their girlfriends with them on tour and stay at the fanciest hotels and eat nice meals and travel in luxury. But, he added, for a player at his level, there’s nothing luxurious about this lifestyle. It’s a grind. It’s sleeping on people’s floors. It’s eating ramen noodles meal after meal because that’s all you can afford. It’s hoping someone somewhere will find it in their heart to let you use their stringing machine or donate court time so you can practice.

We talked a bit about mentors, and I mentioned to James that I’d love for him to spend some time hitting and talking with my son next time he’s in Atlanta. He said he absolutely would love to! He told me that when he was 13 or 14, a mentor came into his life that really changed his perspective on things and that he would love the opportunity to do that for someone else. He sees himself becoming a mentor to as many players as possible once his time on the tour is done.

I asked James how long he was willing to chase his dream, how many more years would he devote to professional tennis, and did he have a set goal in mind. He told me that he would play until one of two things happens: he is permanently derailed by injury or he meets the girl of his dreams and decides to marry her and settle into family life. Otherwise, he said, there is no end-date in site. He doesn’t want to set a ranking goal for himself – say, top 50 or top 10 in the world – because what if he reaches it? Would that mean it was okay to quit? Or, what if he never reaches it? Does that mean he has failed in his quest? However high the ranking he eventually reaches, James went on, he won’t be satisfied if he doesn’t feel he’s given tennis his all. Tennis is what fuels him, what makes him get out of bed each morning, what drives him to work and to fight each and every day to get better. When I asked him what he saw himself doing once the tennis is finished, he really didn’t have an answer other than it would likely be something in the tennis world, though it could just as likely be in business or some other area. At this point, there is no Plan B. Just Plan A: to continue working as hard as possible, to stay healthy, and to keep earning those ranking points, one tournament at a time.