Are ITF Tournaments the Correct Path for Juniors? 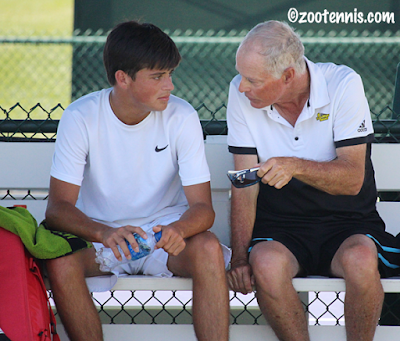 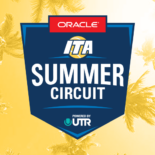 In light of our last 2 podcasts (click here and here), I thought you might enjoy reading Todd Widom‘s article about playing ITF Junior tournaments. Thank you to Colette Lewis and ZooTennis for use of the photo of Ronnie Hohmann and Coach Pierre Arnold.

I keep hearing that parents want to put their child into ITF tournaments.  As many of you already know, my top student who I have been coaching and guiding for four years, just became the only person in the history of the Easter Bowl ITF to go through qualifying and win the boys 18 and under division in Indian Wells, California.  The first Junior player in 52 years.  He won a total of nine matches and beat some of the top juniors in the world.  What was most impressive was that he beat players he recently lost to or players that he had never before beat.  How could this happen?  Was this just a lucky week?  I don’t think so and I’ll explain why.

The first question I get is why did Ronald Hohmann have to qualify?  He’s been a top junior in the country, but he never played in ITF tournaments except for two very low-level ITF tournaments.  For the vast majority of kids in the United States, they do not need to play ITF tournaments.  There is some obsession with coaches, parents, and kids that they feel special because they’re playing in international tennis tournaments.  However, I can tell you from experience that if the goal for your child is to develop into the best player that they can, there are more time efficient and cost-effective ways to go about this process.

In South Florida, where I train my students, there are tournaments for all different types of levels, which is just fantastic for being efficient in the developmental process of a junior tennis player.  The students have tournaments on the weekends and maybe Monday depending on how they perform, and then they get right back to training and working on what they need to, based upon their performance in their tournament.  The scheduling and management of the student is monitored so that you can keep the development going for that particular individual.

If we are speaking purely about developing tennis players to the highest level that they can attain, management of the child in so many different aspects is very important and they must be managed with professionals who know how to develop junior tennis players.  If you do not have experienced people around your child, you will waste money and time and nobody I know has that luxury.  For kids that are starting out playing ITF tournaments at the lowest level or any level for that matter, there is a lot of down time at those tournaments.  The junior plays a match one day and may not have a match the next day, or maybe they have some doubles matches but there is a lot of down time.  One must understand that improvements to your child’s tennis do not happen on the road at tournaments.  They happen at home when you are training, and regardless of what tournaments are played, you monitor what needs to be worked on after the tournament is complete.

The problem I see is that there is a lot of wasted time at the ITF tournaments.  These junior players are not at a stage where they can be losing precious training time.  The vast majority of kids need to develop many different facets of their game before they either enter the college arena or maybe professional tennis.  There are great players that have come through the ITF tour to become the world’s best players, and there are others who never played ITF tournaments and became high level professionals.

An ideal situation for any player choosing this route is to have a coach who understands how to develop high level players, and understands that traveling worldwide to junior tournaments is not a vacation, that the kids need to train not only on their tennis on the road, but also their physical fitness.  That’s right, physical fitness is most important, because when you play matches and are away from home, you lose precious fitness and strength since it is hard to keep up a high fitness level on the road.  What I am speaking about is not a tennis academy bringing a coach/chaperone and thinking that 5 -10 kids are going to be doing things properly on the road, that is a vacation with some tennis players.  I am speaking about a great coach and manager who has maybe a player or two who knows how to develop players.  This is rare and takes a very experienced person to keep the developmental path going for that particular player or players.

If you are concerned that your child may not get into the school that they would like to go to without international competition, that is far from the truth.  College coaches know the level of your child and they want to get the best player and representative of their university that they can.  Whether your child does well in the United States, or abroad, they are in the business of knowing and understanding their recruits and their level of tennis.

Going back to Ronald and his development path, I was monitoring him for years and knew when it was going to be time for him to start playing men.  If you have holes in your game, your brain, or physical fitness, this will show up against men and not so much against juniors.  It is just a different level.  I am always a believer that in the United States, you do very well in your national tournaments and if you are on a great path, you can start playing men at around age 16 or so.  At this age, if you can be exposed to players ranked around 400 or lower on the ATP Tour or high-level college players, when you walk through that door to play college at 18 years old, you will be ahead of many of your competition.  If you can dominate players at this level and win professional events, you may be looking at a professional career at 18 years old, which is rare, but can happen.  It just depends on the results, the will and determination of the player, and if the player has much more growth in terms of their development.

In terms of foreign players, they may outgrow their country and need to travel abroad playing ITF tournaments because they have dominated their country.  That is the case for many great foreign amateurs.  They run out of options and competition which is a positive thing.  One must understand that going to international tournaments, is an expense for the parents, but it is an investment for many federations worldwide to see if they have some potential professionals coming out of their country.  So, is it a good investment for the federations to invest hundreds of thousands of dollars or even millions of dollars in junior players, training, and coaching to see if they will become high level professionals?  It comes down to development and coaches who work for federations that have to justify their job by the rankings of certain players that they are guiding.  Are they developing great players because they became highly ranked and played many high-level ITF tournaments?  Keep in mind that there are high-level players where they attained high rankings who struggled to make their college tennis lineup, or did not even make the lineup.  It comes down to development and not the types of tournaments being played.

Was it a surprise that Ronald won the Easter Bowl coming through qualifying and being the first junior in 52 years to win the title coming through qualifying?  It was exciting to see it and watch him pick apart players that he had never beaten before.  It means that he has improved at many different parts of his game and brain over many years of training and development to have this happen.  As I have stated many times before, you want junior players to be peaking at 16-18 years old and he fits right in here at 17 years of age. For a year he has been playing professional events and competing very well with players with good rankings and with way more experience than him.  He also has had the opportunity to have training sessions with players like Kevin Anderson, Gael Monfils, Fernando Verdasco, Reilly Opelka, Mackenzie McDonald, Radu Albot, and Rajeev Ram. For me, it was not a surprise he was able to win Easter Bowl.  He has put in the work and has shown he can compete with the world’s best juniors.