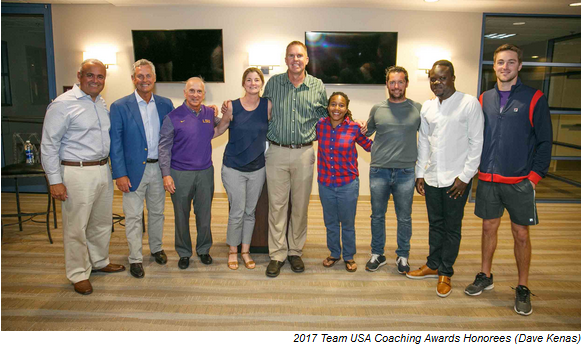 Tennis Parenting Across the Pond with Sharon Gaskin

The USTA recently announced that Konstantin Anisimov, father and coach of 16-year old Amanda Anisimova, the youngest player in the WTA Top 150, was named as the 2017 Team USA Developmental Coach of the Year as part of USTA Player Development’s annual Team USA Coaching Awards. The JTCC in College Park, Md., was recognized as the 2017 Team USA Developmental Program of the Year, while USTA Florida was named the 2017 Team USA Player Development Section of the Year. Renowned coaches Ricardo Acuna, Andy Brandi and Tom Gullikson were also honored with Team USA Legendary Coaching Awards. All honorees were recognized at a reception on Sunday at the adidas Easter Bowl junior tournament in Indian Wells, Calif.

Konstantin Anisimov, based in Aventura, Fla., is the father and coach of 16-year old Amanda Anisimova, the 2017 US Open girls’ singles champion and the youngest player in the WTA Top 150, at No. 130. Formerly the No. 2-ranked junior in the world, Amanda won her first pro title in 2017, at the $60,000 USTA Pro Circuit event in Sacramento, Calif., and last week defeated No. 9 Petra Kvitova en route to a fourth-round appearance at the BNP Paribas Open WTA Premier event in Indian Wells, Calif. Anisimov also worked with junior Mark Sverdlov in 2017, a five-star recruit rated as high as No. 61 in the nation in the Class of 2019 on Tennis Recruiting, and 14-year old Alexandra Yepifanova, the No. 3-ranked recruit in the Class of 2021.

“Mr. Anisimov has taught his daughter, Amanda, all of the skills that she will need as she develops on the tour and becomes a great player,” said USTA Player Development General Manager Martin Blackman. “It is important that we recognize Konstantin’s achievements as a parent-coach and we look forward to seeing Amanda’s continued success.”

After an 11-year career on tour in which in he was ranked in the Top 50 in both singles and doubles and reached the Wimbledon quarterfinals in 1985, Ricardo Acuna served as both the Assistant Director and the Director of Tennis at the ATP headquarters in Ponte Vedra Beach, Fla., and on the USTA Player Development staff as a National Coach for Men’s Tennis for 15 years. As a USTA National Coach, Ricardo coached and traveled with many of America’s top boys’ players, including the group of four who all reached the semifinals at the prestigious Les Petits As 14-and-under tournament in France in 2012: champion Frances Tiafoe, finalist William Blumberg and semifinalists Michael Mmoh and Nathan Ponwith.

“Ricardo’s passion is tennis, and by combining that passion with a skill and work ethic, he was able to be successful in every segment of the ‘American Pathway’ – as an All-American in College, as a professional player and as a great coach,” Blackman said. “Ricardo’s passion, knowledge and generosity impacted hundreds of lives, and many of our top male players have stories of how Ricardo coached and mentored them.”

Andy Brandi, who is currently the co-head men’s tennis coach at LSU with his son, Chris, is a decorated coach with success in the college game, at academies and as a Lead National Coach for Men’s Tennis for the USTA. Brandi was the Head Women’s Tennis Coach at the University of Florida from 1985-2001, leading the Gators to three NCAA team championships (1992, 1996, 1998).  His teams posted a 460-43 overall record, and his overall winning percentage of 91.5 percent ranks as the highest for any coach in the history of women’s collegiate tennis with at least five years of experience. Brandi worked at the Harry Hopman Tennis Academy in Largo, Fla., the IMG Bollettieri Academy in Bradenton, Fla., the Evert Academy in Boca Raton, Fla., and the Harold Solomon Tennis Institute in Fort Lauderdale. Andy coached Top 10 WTA players Kathy Rinaldi, Elena Dementieva, Maria Kirilenko and 12-time Grand Slam doubles winner Lisa Raymond. He also traveled with Carling Bassett and Lisa Bonder as former Top-10 players for Nick Bollettieri. On the men’s side, he coached Top-10 player Jay Berger and traveled for Nick Bollettieri with Top-10 players Jimmy Arias and Aaron Krickstein. (Editor’s Note: check out Andy’s articles for ParentingAces here)

“Andy Brandi is the epitome of a coach who has taken the knowledge and wisdom from one generation and preserved and translated it for the next,” Blackman said. “Andy was able to take what he learned from Harry Hopman and Welby Van Horn and others and combine it with his brilliant coaching mind to make him one of the most successful women’s coaches of all time at the University of Florida. He excelled as a coach on the WTA tour and made a huge contribution to American tennis as a Lead National Coach with the USTA, working with our top boys and their coaches.”

Tom Gullikson began coaching with the USTA in 1988 as one of the very first coaches in the USTA Player Development program, and he guided American stars Jim Courier, Todd Martin, MaliVai Washington and Jennifer Capriati, among others, during their careers. He was the U.S. Davis Cup captain from 1994 to 1999, leading the 1995 team to the Davis Cup title, and he was the men’s coach for the 1996 Olympic Games in Atlanta, where he helped Andre Agassi win the men’s singles gold medal. He later served as the program’s Director of Coaching from 1997 to 2001. He retired in 2017 as a USTA Lead National Coach.

“’Captain Gully’ has made, and continues to make an invaluable contribution to American tennis,” Blackman said. “As a leader and a coach for the USTA, Tom was instrumental in building the foundation on which Player Development sits today. Whether as a top pro on the ATP tour, a Davis Cup Captain or Lead Coach for the Team USA Department, Tom makes those around him better and has a unique way of teaching and mentoring that attracts players and coaches alike.”

JTCC earns its second Team USA Developmental Program of the Year Award after being the inaugural honoree for 2013. JTCC had a stellar year in junior tennis with two of its players winning 2017 USTA National Championships – Saud Alhogbani (Boys’ 14s) and Robin Montgomery (Girls’ 14s) – both players who also won doubles titles at the USTA National Clay Court Championships.  In all, JTCC won seven Gold Balls in 2017. In addition, five JTCC alumni were in NCAA finals (Divisions I-III), and three of them became NCAA champions. On the pro tour, its alumnus Frances Tiafoe had his best year on tour to date, reaching a career high No. 60 on the ATP Tour last July; Denis Kudla was ranked between Nos. 110 and 200 throughout the year, and Usue Arconada closed in on the WTA Top 200. As part of its mission statement, JTCC “uses tennis as a vehicle to develop champions with the highest standards of fair play on and off the court, providing a pathway from the introduction to the game to the top-tier collegiate and professional competition.”

“The JTCC in College Park continues to live up to its role as a prototype for programs throughout the country,” Blackman said. “Combining mentoring, education and character-development with tennis training, JTCC proves every year that juniors achieve more on the court when they are developed as people off the court. Congratulations and thank you to Ray Benton, Vesa Ponkka and all of the great coaches and staff at JTCC for continuing to develop great junior players who are able to use tennis a vehicle to pursue a college education and be successful on the tour.”

The USTA Florida section had a banner year of results; players with Florida roots had tremendous success at the highest levels of the game. Sloane Stephens (Coral Springs) won the women’s singles title at the US Open; Amanda Anisimova (Aventura) won the US Open girls’ title and Whitney Osuigwe (Bradenton) took home the French Open girls’ singles title. Whitney also finished the year as the No. 1-ranked junior in the world. In addition, the 14-and-under Teen Tennis tournament in Bolton, England, had four Americans in the finals of the boys’ and the girls’ events for the first time in the tournament’s 23-year history. Not only were they all from the U.S., but they were all from the Florida Section. Florida also was the home for all six members of Team USA’s World Championships in Prostejov, Czech Republic – Coco Gauff, Charlotte Owensby, Gabby Price, Alex Bernard, Toby Kodat and Martin Damm – where the girls’ team won the world title. At the grassroots level, the Section helped in hosting two TEAM USA Sectional Camps and one TEAM USA Regional Camp. Player Development Manager Andy Gladstone and Coaches Commission Chair Robert Gomez worked with the Coaches Commission in executing the selection process for these camps, and also running the 10-and-Under Early Development Camps across the state.

“The Florida Section had a blockbuster year with outstanding results both nationally and internationally,” said Kent Kinnear, Director, Player ID and Development, USTA Player Development. “Team USA’s 14- and-under teams were flooded with Florida’s players, Floridians Whitney Osuigwe and Amanda Anisimova won the French Open and US Open junior championships, respectively, and Sloane Stephens had a breakout performance in winning the US Open to cap off an incredible year for the Florida Section. A big congratulations to Doug Booth, who just recently retired as the Florida Section’s Executive Director, Jason Gilbert, Andy Gladstone and also Robert Gomez, who serves as the Section’s Coaches Commission Chair.”