A New Type of Tournament

A little wedding-ing, a little tennis-ing – it was the perfect weekend on the Left Coast!

When I found out that the 60th annual Southern California Intercollegiate Championships were the same weekend as my daughter’s best friend’s wedding in Downtown LA, I was so excited! Not simply because I was going to have another chance to watch some amazing college tennis, but also because this was going to be the first college tournament using Playsight’s PlayFair tournament format.

What is PlayFair? Only the answer to every Tennis Parent’s dreams! Here’s how it works:

For the SoCal Intercollegiate tournament, there were 3 roving officials covering 6 courts.

Jeff Angus of Playsight, who was the one actually on the court running the challenge replays, explained the process in a little more detail. “On every court there are 5-10 instant video replay views. Officials can access instant replay and make the call. Players make the challenge – and coaches can signal to a player to challenge – then an official and someone from Playsight (me at this event) goes to the kiosk, loads the video up. Challenge time has been anywhere from a few seconds to a minute. We rely on video – it’s 100% accurate since it’s video, not tracking software like Hawkeye. The official makes the call – good, bad, or inconclusive. The players and coaches may not be happy with the call but they respect it, so there’s been a lot of challenges, which is more than I expected, but it’s also created a deterrence mindset in the players.”

And it’s the “deterrence mindset” that seems to be the greatest asset of the PlayFair system. Erica Perkins Jasper, COO of the ITA, observed, “Because the technology is there, the players have trusted each other more.”

for 6 months in practice, but it hasn’t had the same impact as it had in one day yesterday. Guys were trying really hard to make the right call because they had ‘god’ above them. Last week at Regionals, several teams walked away with a bad feeling. We’re okay if we lose; we just don’t want to be robbed. I don’t think anyone left here yesterday feeling like they were robbed.”

The players seemed to be happy with this new technology as well. Nick Crystal, a senior on USC’s team, explained, “You have a 2nd eye. The officials are on the court, and if it’s close, you’re going to challenge. It’s nice to get that 2nd opinion and just know that you’re sure about a call. It’s impacting the close calls. People are only calling balls they for sure see out – rather than making a tight call – because they know you can go to the challenge system and they can get overruled. I think you can go out there and play more freely when you don’t have to worry about someone making a bad call, just focus on yourself and your game.”

Shot of the challenge screen

Jeff Angus saw a positive response to PlayFair in both the players and coaches, as well. “It’s surprised me how quickly not only the players but also coaches & officials have taken to the process.  Right away there’s been a different vibe at this tournament in terms of not really any arguing and bickering over line calls because it’s pretty clear, it’s video,” said Angus.

In terms of how it’s affecting the officials, Angus went on, “There’s seems to be a sort of calmness amongst the players, not only toward each other but also toward the officials. We’re trying to create better officials by validating or overturning their calls.”

Things are still up in the air in terms of how this new technology will be used, especially at the collegiate level. Like Coach Smith told me, “How do we NOT use this now?” Erica Perkins Jasper is optimistic. “The future is really bright. Obviously, we have a great partnership with Playsight. I definitely agree that tennis needs to be more proactive in terms of embracing technology.”

One concern about embracing this particular technology is that it could widen the gap between the “haves” and the “have-nots” due to the high cost of installing and maintaining the cameras and kiosks. For the programs that have the funding to embrace this state-of-the-art technology, it’s amazing. But for the vast majority of programs, the $10k+-per-court cost is prohibitive. I know the ITA is working hard to build partnerships, and maybe this is one way those partnerships will pay off. Wouldn’t it be awesome if Oracle (as an example) provided matching grants to colleges that wanted to put Playsight or livescoring or other technology in place?!? As Tennis Parent Scott Holt told me, “I think it’s great for college matches. The biggest positive is it brings fans into the game and makes it more exciting which we all need. I hope they take it a step further and put it [the challenge] up on the big board. Then we’ll be able to really see it and get the clapping going like they do at the big tournaments. I’m all for it. Anything to make college tennis better.”

So, what’s coming in terms of rolling out PlayFair to other events? Playsight’s Jeff Angus shared, “We’re hoping it will become the standard of what’s done in junior tennis, college tennis, club tennis, even the pro level beyond the Hawkeye technology. Just knowing that you don’t have to have your eyes tracking all courts, you know your player is going to be supported by the video. It really gives everyone involved peace of mind. We have some USTA-sanctioned junior PlayFair tournaments coming soon. Our goal is to get this built into USTA at all levels – juniors, league, college – leveling the playing field.”

Are you curious about how many challenges there were in this pilot event? Overall, there were 63 challenges over the 5-day tournament with 35 overrules, 19 bad challenges, and 9 inconclusive challenges. On the first day of play, Playsight confirmed every call challenged. However, on Day 2, the video caused an official to overturn his own overrule. Playsight has promised to release additional data this week. 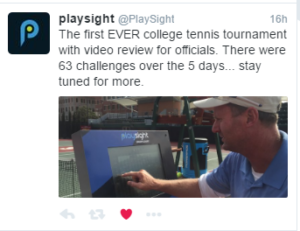 For more information on Playsight and PlayFair, click here for a Forbes article published earlier this week, here for Playsight’s blog post, and here for my podcast with Playsight key investor Gordon Uehling.