Americans & Collegians Down Under, Day 4 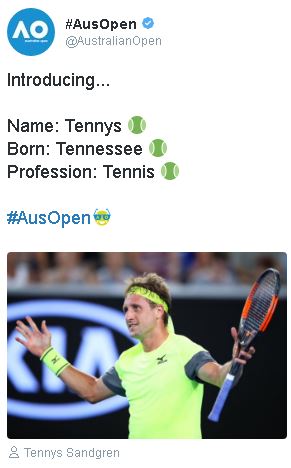 We are down to two men and three women left in the Australian Open Singles Draws as we enter Round 3 tonight.

When I woke up and turned on my tv this morning, I couldn’t believe the score line. Tennys was up 2 sets to love and up a break in the 3rd. I watched as Wawrinka struggled to hold serve to stay in the match and force Tennys to serve it out. During the side change at 4-5 in the 3rd set, commentators were speculating about how Sandgren would handle the pressure. But handle it he did! Yes, Stan is just coming back from knee surgery, and no, he definitely didn’t look to be 100% health-wise, but it still takes enormous belief and focus to beat a guy who has won this tournament and two other Slams in his career. Well done, Tennys! And good luck versus Max Marterer in Round 3!

And Croatia-born American Bernarda Pera continues to maximize her Lucky Loser opportunity this week. She was definitely the underdog in her matchup against Great Britain’s Jo Konta, the 9 seed. Pera stayed focus, played her game, and came away with a straight set victory and a spot in the 3rd round. She faces 20-seed Barbora Strycova next.

Here’s the rundown from Day 4:

Here’s what’s on the schedule for Friday (Thursday night in the US):