Why Does Junior Tennis Prohibit Coaching? 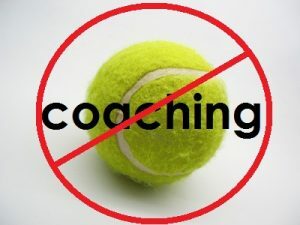 Tennis Parent Mike Frank emailed me the following thoughts and gave me permission to share them with you. He raises some great points about coaching and junior tennis, many of which have been discussed in the past but which warrant revisiting in the new year. Please feel free to add your 2 cents in the Comments section below.

The majority of competitive juniors will play high school tennis and some will play tennis in college. Very few will play professionally. So why do the organizers of junior tennis events use a rule for professionals that prohibits coaching during match play?

The USTA is the only sporting organization that does not allow coaching during junior competitions. It has serious ramifications for player development and enjoyment of the sport.

Coaching is a critical component of any learning process. Coaching does happen in tennis, unfortunately it happens all at once at the end of a match. It involves a parent or coach opening the fire hose of compliments and criticism. You’re driving home, you’re tired, you’re hungry and neither the coach nor the player remembers half of the details of the match (oh, and video recording is prohibited also). By that time, all opportunities for learning are long gone. It would be much more efficient for a player to receive it in real time. Just like every other youth sport and high school and college tennis.

A perfect example presented itself just yesterday. I witnessed a UTR event where a 12-year-old girl was matched up against a 16-year-old boy. UTR events, as many know, are designed to make matches extremely competitive. Unfortunately, the organization holding the UTR event defaulted to USTA rules that don’t allow coaching. UTR actually allows for coaching during match play in various formats. The manner in which coaches may communicate with players is left to the discretion of the organization holding the event.

True to UTR form, the 16-year-old boy and 12-year-old girl were evenly matched in every aspect, except for one. The boy served like a man. She had no answer. He hit ace after ace. She whiffed. She hit off the frame of her racquet. She got beamed. She couldn’t even see if the serves were in or out they were coming at her so fast. The entire time, she hugged the baseline as she would successfully against any 12-year-old. She became frustrated to the point where it was no longer fun. The match wound up being very lopsided.

All someone needed to do was to tell her to “move back.” She’d be back in the match. It would be more competitive and enjoyable for both players. Instead, she would have to wait until the END of the match to hear her mother tell her “move back.” Those 2 seconds of advice would have saved 3 hours of driving (to and from for both players and parents), 3 hours of tennis and $70, plus money for gas and food.

A perfect opportunity to learn flushed down the drain because we think kids need the same rules as professionals.

Basketball, soccer, hockey, football, baseball and especially in individual sports like track, wrestling, swimming and golf all have coaches or parents guiding athletes during competition. There’s a wide range of etiquette, depending on the sport of course. Wrestling coaches scream almost constantly two feet from the mat, even while multiple matches are taking place. Golf coaches (caddies) whisper advice only when other competitors are not playing a shot. Tennis coaching has its own set of etiquette and it doesn’t mean that kids are “just figuring it out.”

Allowing coaching also solves the cheating problem. Every competitive activity ever created has checks and balances that identify and punish cheating. That’s why people don’t do it. If you cheat, you get caught and you’re punished. That’s it. Lesson learned. Do we really expect kids to “just figure it out?”