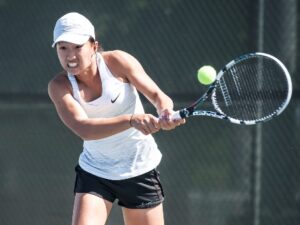 Just two weeks after capturing her first USTA Pro Circuit $10,000 Futures title in Florida, Thousand Oaks’ Claire Liu is back home and ready to take on a strong field in the Girls’ 18s singles at the 11th annual USTA International Spring Championships starting this weekend at StubHub Center.

The 14-year-old Liu trains with personal coach Mike Gennette and USTA National Coaches Leo Azevedo and Adam Peterson out of the USTA Training Center – West, the site where the tournament takes place. She has represented the U.S. in international junior play, winning gold at the 14-and-under World Junior Tennis competition in 2013.

Usue Arconada, a 16-year-old currently No. 8 in the ITF rankings, is 15-1 this year in Grade 1 and Grade A ITF junior events and trains at the Junior Tennis Champions Center in College Park, Md. A semifinalist at Carson last year, Arconada lost to last year’s 18s winner CiCi Bellis, 6-4, 6-4, in the second round of a USTA Pro Circuit $25,000 event last month in Rancho Santa Fe, Calif.

She captured an ITF $10,000 pro event in the Caribbean in January and currently holds a WTA Tour world ranking of No. 663. Arconada most recently won the Grade A Campeonato Internacional in Porto Alegre in Brazil, and the prestigious Banana Bowl a week before that, beating the nation’s top girls’ recruit Francesca Di Lorenzo from Ohio in a three-set final. Di Lorenzo, who will play for Ohio State next Fall, will be seeded at Carson and was No. 34 in the last ITF world junior rankings.

Neel recently made headlines by shocking No. 7 seed and WTA No. 85 Donna Vekic of Croatia 6-1, 6-2, at the WTA Miami Open qualifying tournament while Dolehide was a US Open Junior semifinalist last fall.

In the boys’ 18s, William Blumberg of Greenwich, Conn., is the highest ranking ITF world-ranked player moving up from No. 33 to No. 15 after a finalist appearance at the Grade A Campeonato Internacional in Porto Alegre in Brazil. Following him on the boys’ side are Miomir Kecmanovic of Serbia at No. 26, and Americans Ulises Blanch (No. 38), Nathan Ponwith (No. 49), Emil Reinberg (No. 61), and Sameer Kumar (No. 76).

In the girls’ 16s, top players include Emma Decoste, Alexandra Belaya, Taylor Johnson and Victoria Flores. On the boys’ side in the 16s, look for Jack Pullman, William Peters, William Grant, and Brian Cernoch.

Past champions of the event include Sam Querrey (2005), Bradley Klahn (2008), Sloane Stephens (2009) and Melanie Oudin (2008), just a few who have gone on to bigger and better things on the pro and collegiate circuit.