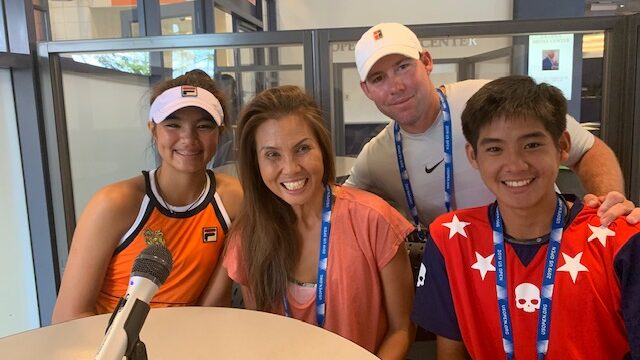 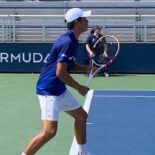 To say that yesterday at the US Open was busy might be a bit of an understatement! The Junior Singles and Doubles schedules were jam packed with must-see matches, and I had several players and parents – and coaches/hitting partners – to interview. Add to that a short rain delay late in the afternoon, and, well, anyone who has been to a junior tournament knows how good it feels to get into your pajamas at the end of the day!

When today’s schedule came out, and I realized play wasn’t starting until Noon, I made the decision to stay on site after the juniors were done to watch the Andreescu-Mertens and Nadal-Schwartzman matches in Arthur Ashe Stadium. Those of you who have followed ParentingAces for any amount of time know what a HUGE Rafa fan I am, and last night did not disappoint! After being at the Billie Jean King National Tennis Center for over 15 1/2 hours, I took the tournament shuttle back to my hotel in Manhattan and passed out!

Today’s schedule is full, too, with the Junior Singles in the Round of 16 and the Doubles in the Quarterfinals. For a complete list of matches, go to usopen.org.

Before closing, I would like to share an interview I did with 17-year-old Thai Junior Player Mai Nirundorn, her mother, Jean, her brother, T, and their coach, Travis. Mai reached the Final in last week’s ITF Grade 1 tournament in College Park, Maryland. Thank you to Scott Colson of the PayersPlayers Podcast for alerting me to Mai’s story!