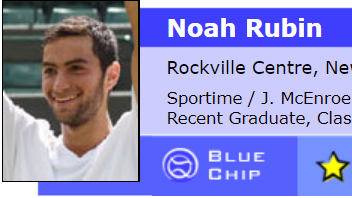 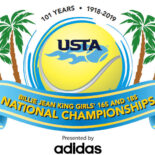 If you’ve been following ParentingAces for any length of time, you probably know exactly who Noah Rubin is! For those of you who don’t know, here is a little background . . .

As a junior player, Noah consistently sat atop the USTA and ITF Junior rankings starting at a very young age. He grew up on Long Island in New York and trained at Sportime, now the John McEnroe Tennis Academy. In his last year of Junior Tennis, Noah won the Wimbledon Boys Singles title, beating his friend and compatriot, Stefan Kozlov, in the final. The next month, Noah won the USTA National Hardcourt Singles Title at Kalamazoo, earning a coveted wildcard into the 2014 US Open Main Draw, his home Slam.

I was lucky enough to be at the US Open that year and got to see Noah’s first round match versus Argentine Federico Delbonis. Unfortunately, the match didn’t go Noah’s way, but it was all good since he was due to report for his Freshman year at Wake Forest that week. Noah had a great year at Wake, making it to the Final of the NCAA Men’s Singles event that spring. Given his success throughout his Freshman year, he decided to postpone college and try his hand on the professional tour where he has won 4 Challenger titles so far and is currently ranked 170 in the world.

Most recently, Noah has been focusing his off-court time interviewing his fellow players for Behind the Racquet, a social media series he developed to shed light on the challenges these players face. He is also doing a weekly podcast with Challenger Tour commentator, Mike Cation, called THE COFFEE CAST, that airs each Monday. It is because of a recent COFFEE CAST episode discussing happiness that I asked to interview Noah.

For our Premium Members, my video interview with Noah Rubin is below.