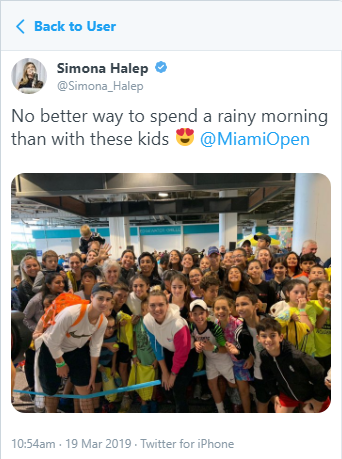 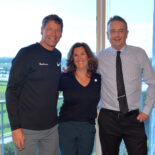 My 8 Hours in Miami

Well, the Miami weather may not have been ideal for tennis, but that didn’t stop the players from having fun!

Tuesday was Kids’ Day at the Miami Open. According to the notes I received from the tournament, Kids’ Day took place at Hard Rock Stadium where young tennis fans were treated to an amazing day. The rain did not stop the fun, as youth were able to volley with John Millman and 2017 Miami Open winner Johanna Konta. As the day went on, the excitement grew. Grand Slam winner Simona Halep took the kids by storm, pausing the tennis action to take selfies and sign autographs. Rising star Frances Tiafoe closed out the day with more tennis action and photos.

One initiative that I’m loving at the Miami Open is Miami Open Unites!

Miami Open Unites deployed around the city of Miami for its inaugural day of service. Players from the ATP and WTA gave back to the community in an amazing way. Nick Kyrigos, Stefanos Tsitsipas, Marin Cilic, Nicolas Jarry, Diego Schwartzman, Petra Knitova and Kei Nishikori shared their stories of overcoming adversity with youth from Hollywood Park Elementary. Grigor Dimitrov, David Ferrer, Borna Coric, Garbiñe Muguruza and Anett Kontaveit went to Miami Rescue Mission to feed the homeless, while Bob and Mike Bryan, along with Aryana Sabalenka, brightened the day of children at Baptist Children’s Hospital by delivering toys and spending time with the kids. Dominic Thiem, Miomir Kecmanovic, Guido Pella, Elise Mertens, Julia Goerges and Kiki Bertens painted the home of an elderly Miami Gardens’ resident alongside volunteers with Rebuilding Together.

The rain could not stop the work at Health in the Hood. Tournament director James Blake presented the organization with a check on behalf of the ATP and WTA; and the day ended with a rescue dog finding a new home. 2018 Miami Open finalist Alexander Zverev adopted “Pop,” after cuddling the pup at the Humane Society of Greater Miami.

And, tomorrow, I’ll be at the tournament, but just for the day. Please let me know if you’ll be on site as well so we can connect!