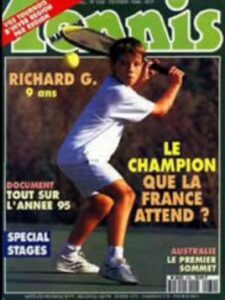 Why, you might ask, is there a French magazine cover pictured at the top of this post?  Well, 2 reasons . . . first of all, because I want everyone to notice that it features French pro, Richard Gasquet, at the age of 9, playing tennis using a yellow ball.  Second of all, because in just a few weeks I’ll be at Roland Garros watching a couple of days of phenomenal tennis at the French Open and am pretty darn excited!  (P.S. Anyone who wants to hook me up with courtside seats, you know how to reach me!)

Some of you may have gotten wind of the changes happening across the country with 10-and-under tennis and the mandated use of the ROG balls in tournament play.  What you may not know is that ROG is now infiltrating the 12s, too.

The state of Georgia implemented a new competition structure for the 12-and-under crowd this year, and more changes are coming in 2014.  I spent some time on the phone with Rick Davison, USTA Georgia’s Director of Junior & Adult Competition, to find out what’s new, what’s coming, and the reason behind the changes.

What does that mean?  It means that a child who is under the age of 13 who wants to compete in a local tournament on a full-size court with yellow balls must play in the 14-and-under age division.  So, if your child is 9 years old (or 10 or 11 or 12), practicing each day with a yellow ball on a regular court because you and the coach feel the child is ready, and wants to compete under those same conditions, you must put him or her in the 14s in order to play a local event.

Take a close look at this photo: 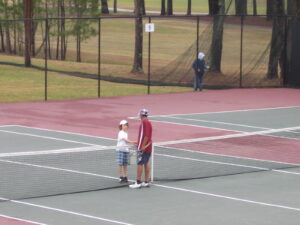 The player on the left is my son, age 11, playing at a local Georgia tournament in the 12-and-under division.  The player on the right is his opponent, also age 11.  Please note the physical size difference between the 2 boys.  Now, imagine that, in order to play with regular balls on a regular court, my son had to play in the 14s . . . and my son was already 11 in this picture!  He would’ve gotten crushed!

I asked Rick why Georgia decided to implement these new rules for the 12s.  He told me that the talented 12-and-under players have historically always played up in the 14s anyway at the local events, so this change won’t impact them.  The target audience for this change is the 10-and-under player who is transitioning from the orange ball.  Georgia felt that it would make an easier transition for the players if they have a stint with the green ball on the way to the yellow ball.  So far, Rick says, the Georgia kids are transitioning well in the Southern section, and the level of play in the 12s is getting better.

One other change that happened in the 10s this year was the shift to 4-game sets.  Rick says that he was initially opposed to this change but quickly realized that the parents were in favor due to the much longer rallies with the orange balls – matches that were 2 out of 3 6-game sets were lasting much too long.

For 2014, Georgia is making some additional changes in terms of the match and tournament format.  For the 10-and-unders only, since matches are the best of 3 4-game sets, tournament fees will be reduced and tournaments will most likely be compressed into one-day events.  Rick acknowledged the fact that parents are unhappy about traveling to a tournament, having to spend money on a hotel and restaurant meals, for their child to play these short sets.  Georgia’s answer is to shorten the tournament for these young players so parents can avoid most of the travel expenses.

In case you were wondering, Georgia isn’t the only place seeing these types of changes.  Texas has been under an even more-complicated system for the last year with more changes going into effect this month (click here to read the new rules).  The NorCal section recently introduced its Junior Development Pathway illustrating the progression of a young player from the red to the orange to the green and, finally, to the yellow ball.  Please note that in both Texas and NorCal, progression from one level to the next is absolutely mandated by the section itself – a player may not jump to the appropriate level based on their own personal development but rather must go through each painstaking step in order to move to the yellow ball in competition.  I’ve recently heard that the Midwest section is looking to adopt similar mandates for its 10s and 12s, too.  To hear more about what’s going on around the US, listen to the podcast of my radio show with Lawrence Roddick and others by clicking on this link: ParentingAces Radio Show

If your child is ready to move on, developmentally-speaking, be assured that alternative opportunities are popping up across the country.  Take a look at the events I have listed on our 10-and-Under Tourneys page above – I will continue to add to the list as more events are created so please check back regularly for updates.

I also want to direct you to the complaint that Ray Brown filed with the US Olympic Committee regarding the 10-and-under initiative.  You can click here to read the complaint and all subsequent responses on Ray’s website.

And for those who missed my recent Facebook post/Tweet, proof positive that kids younger than 13 can train and play with a yellow ball: