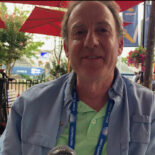 As I mentioned yesterday, I did my best to squeeze in as many interviews as possible on my last day in New York. Because I arrived on site about 2 hours before any tennis was scheduled to start, I had time to sit down with two people who continue to be very influential in our sport: Colette Lewis of ZooTennis and Dave Miley who is running for ITF President. Both of them had some very good insights to share, so please enjoy!

After the interviews, I just had time to regroup before heading out to Court 17 to watch the Girls Singles Finals between American Qualifier Alexandra Yepifanova and Colombian 4th seed Maria Camila Osorio Serrano. Colette has the full breakdown of all the day’s matches on ZooTennis, but suffice it to say that it was not Alexandra’s best day on court even though she felt her opponent played well. I was happy to hear that she is taking some college visits this Fall and keeping her options open. Here is Alexandra’s post-match interview:

Maria, on the other hand, is strictly on a professional path. She intends to spend the next few months playing ITF $25k and $60k pro events and is taking a lot of confidence from her first Junior Grand Slam Title (and last junior tournament overall). Winning it 6-1 6-0 certainly didn’t hurt! Hear from Maria here:

In the Boys Singles Final, played in Louis Armstrong Stadium, it was hard to predict who was going to walk away with the title. The first set was a battle that ended in a tiebreaker between American Emilio Nava and Czech Jonas Forejtek. Nava was able to close out the breaker and take the first set though things took a huge swing in the second set as Forejtek quickly won it 6-0. Both boys battled hard at the beginning of the decider, but it was Forejtek who broke away and won the title 6-7 6-0 6-2. Hear from Emilio on how he played and what’s next for him:

Jonas is looking forward to playing on the Czech Davis Cup team in a couple of weeks followed by the ITF Junior Masters in Chengdu in October. He feels the US Open Boys title certainly puts him in great company and gives him the confidence he needs moving into a professional career. Hear from Jonas himself:

A huge congratulations to the Girls Doubles Champions as well, 5th-seeded Kamilla Bartone of Latvia and Oksana Selekhmeteva of Russia. They defeated the unseeded French pair, Aubane Droguet and Selena Janicijevic, 7-5 7-6. They were very excited to be done with their tennis in time to get in a little shopping before leaving New York!

Congratulations as well to Rafa Nadal and Bianca Andreescu on their Singles Titles, too. And to Juan Sebastian Cabal/Robert Farah and Elise Mertens/Aryna Sabalenka on their Doubles Titles.

I hope you’ve enjoyed my coverage of the 2019 US Open Juniors – I’ve certainly enjoyed covering it for you! Later this week, all the video interviews will be available on our YouTube Channel. Thanks to everyone who has been commenting through our social media and email. I’m not sure what’s next on my schedule, but I will let y’all know as soon as I have a plan!