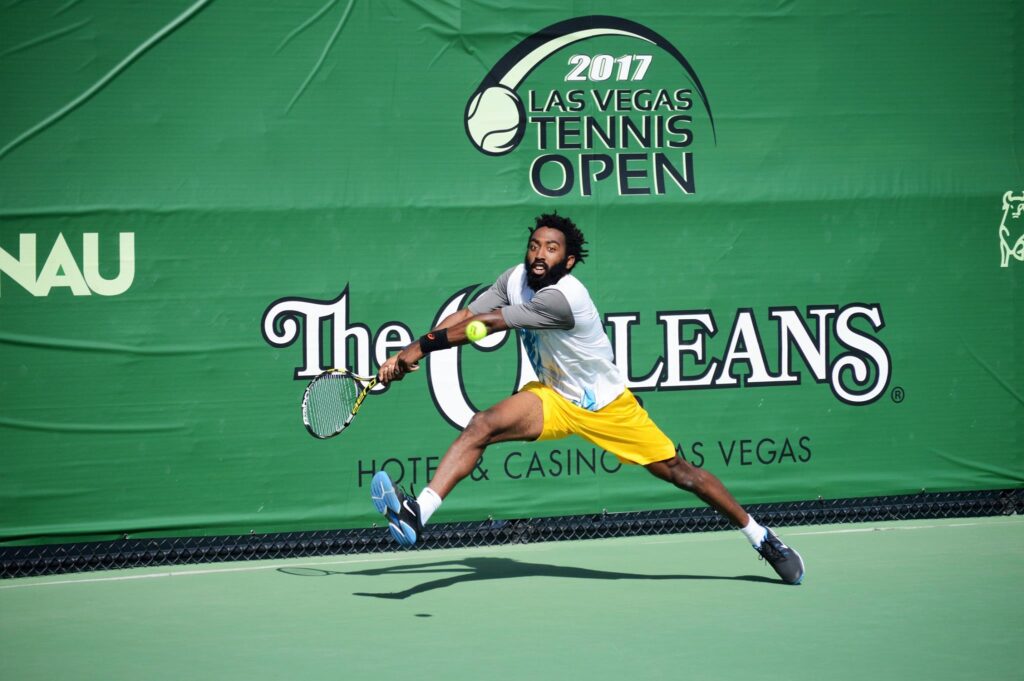 I don’t usually report on pro events, but I thought y’all might be interested in hearing about this one!

There was an unreal marathon point at a crucial stage of the ATP Tour Challenger semifinals on Saturday in Las Vegas: A 56-point rally lasting 1 minute, 22 seconds between Great Britain’s Liam Broady and American player and former University of Michigan stand-out Evan King, both lefties like me!

“We both just put it on the line today and it was 50-50,” the 19-year-old Kozlov told the appreciative Las Vegas crowd during the trophy presentation at the Fertitta Tennis Complex on the campus of UNLV. “We were both left gasping for air and it wasn’t easy. It could have gone either way today. I was very impressed with Liam’s sportsmanship today.”

Kozlov seemed to pick up his game down a set and an early break in the second set. He broke serve for 3-all and then hit several nice finesse shots, to earn a hold at 4-3, pumping his fist and getting the crowd fired up after each point.

“I haven’t had the best last couple of months, a lot of ups and downs,” said Kozlov, who earned $7,200 with the win. “For all the downs, you have to kind of look for the ups and today I had to dig deep for my up.”

Broady received treatment from the tournament trainer for some late-match cramping right after the match and before the awards ceremony, laying on a towel. He told the crowd a few minutes later that he “left it all out there, and sometimes you pay the price.”

Broady was playing in Las Vegas for his third time and received $4,240. He was watched all week by his coach David Sammel. “Obviously Kozlov has so much experience in these big matches,” he said. “Maybe I wasn’t aggressive at the right times of the match, and Koz has such good defense.”

It will be 20 years next month that Kozlov’s favorite player and Las Vegas resident Andre Agassi returned to tennis at age 27 ranked No. 141 in the world and made the final of a similar USTA Pro Circuit $50,000 Challenger in his first tournament back. On these same UNLV courts Agassi began his inspiring journey to regaining the No. 1 ranking in the world.

Like Agassi, Kozlov was a young prodigy who made his ATP World Tour debut as a wild card in Newport at the age of 15. He reached two junior Grand Slam finals in 2014, the Australian Open (lost to current world No. 5-ranked Alexander Zverev) and Wimbledon.

In the doubles final, the top-seeded team of Brydan Klein and Joe Salisbury of Great Britain beat the No. 3-seeded team of Hans Hach Verdugo of Mexico and American Dennis Novikov, 6-3, 4-6, 10-3. Tied 3-all in the super tiebreaker after splitting sets, Klein-Salisbury rallied off seven straight points for the win. Having played together for the past six month, Klein and Salisbury split $3,100. Both Hoch Verdugo (Abilene Christian) and Novikov (UCLA) each played college tennis and were playing for the first time together. They split $1,800.

“It was an amazing week of tennis at the Fertitta Tennis Complex,” said tournament host Owen Hambrook, the head UNLV men’s tennis coach. “This event keeps growing each year and it’s become one of the favorite stops for the players on the ATP Challenger tour. It was great to see a bunch of our up and coming American player do well this week, and we know we’ll be seeing them at the bigger ATP events in the future. Without the support of the amazing Las Vegas tennis community, this event wouldn’t be possible.”