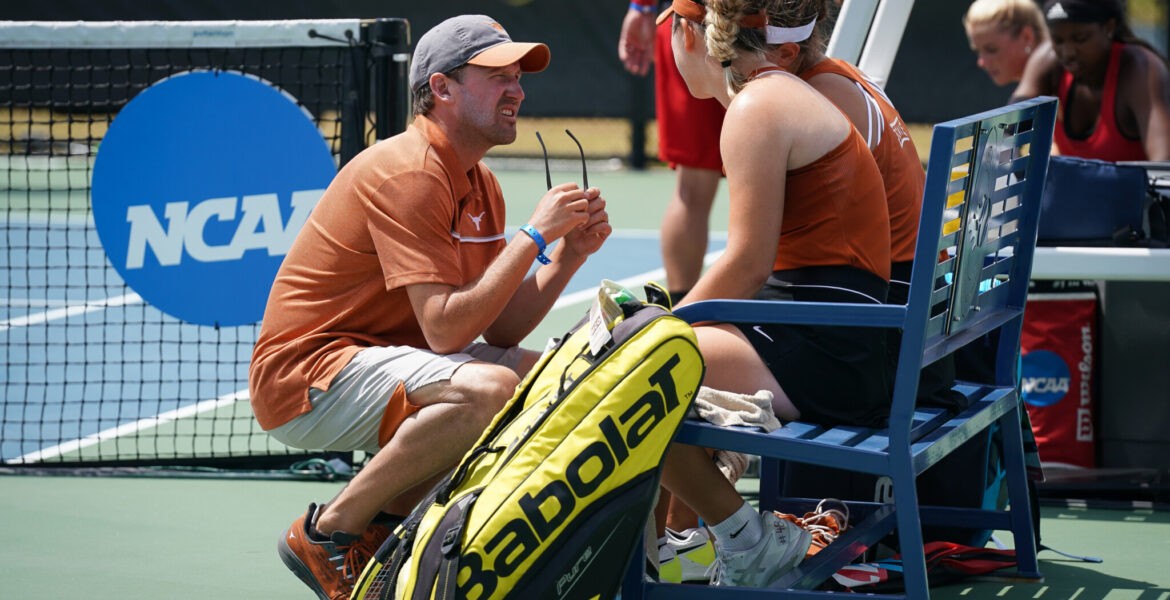 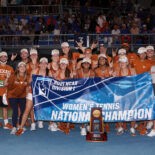 It was another exciting day of college tennis at the USTA National Campus in Orlando with the final four men’s and women’s teams battling for a spot in tomorrow’s Team Finals. All info and photos below courtesy of USTA/NCAA.

Today kicked off with the women as Texas and NC State took the courts.

The No. 2 Texas Longhorns punched their ticket to tomorrow’s national championship match at the NCAA DI Women’s Tennis Championships, with an emphatic 4-0 win over NC State.

Texas got off to an impressive start by winning the doubles point, a feat rarely accomplished by NC State opponents.

From there, Texas took command of the match, winning the opening set in all six singles matches. Peyton Stearns was the first to finish on Court No. 1, knocking off the ITA’s No. 6-ranked singles player, Anna Rogers, 6-1, 6-2.

Texas Women’s Head Coach Howard Joffe had this to say about his team after today’s match: “One of the things, with all sports… there’s a certain science to the coaching and the playing, right? You teach the techniques and the plays and so on and so forth. But there’s an intangible element that our players bring. And I think anyone that watched them play—our players are very joyful. They play with a zest for the game and for life and are out there enjoying themselves. And I think there’s probably a good amount of psychology science that would suggest that that would help with performance. But we have proved to be quite a dominant team over the course of the year.”

Texas moves on to tomorrow’s national championship match and will face No. 5 Pepperdine, while NC State’s historic season comes to a close with the program’s best-ever finish in the NCAA tournament.

The No. 5 Pepperdine Waves pulled off the biggest upset of the tournament, knocking off No. 1 North Carolina, 4-3, ending the Tar Heels’ 48-match winning streak and advancing to the programs first national championship match at the NCAA DI Women’s Tennis Championships.

Pepperdine took an early lead by securing the doubles point with a hard-fought 7-5 win at No. 2 doubles.

North Carolina’s Alexa Graham put the top-seeded Tar Heels on the board with a 6-2, 6-3 win at No. 2 singles, but Pepperdine quickly regained the lead as Shiori Fukuda won on Court No. 4, 6-2, 6-3.

On the men’s side, the No. 2 Baylor Bears won a thriller over No. 3 Tennessee to advance to the program’s first national championship match at the NCAA DI Men’s Tennis Championship since 2005.

Tennessee grabbed the doubles point to take an early 1-0 lead and Giles Hussey doubled that lead with a 6-4, 6-2 win at No. 5 singles.

Nick Stachowiak continued the Baylor momentum, winning a three-setter at No. 4 singles, setting up a showdown on the top two courts to determine who advanced.

Both matches went deep into the third set and Tennessee battled back, fighting off match points, but Matias Soto proved to be too much for Tennessee freshman Johannus Monday, winning 7-6(3), 4-6, 7-5 to clinch the win and send Baylor to the final.

In the final match of the day, the Florida men blanked defending champs, University of Texas, winning the doubles point on Courts 2 and 3 then taking straight-set singles victories on Courts 3, 4, and 5.

Florida Head Coach Bryan Shelton’s son, Ben, left high school early to join the Gators this year and has had a stellar tournament so far. Playing at Line 2 Doubles  – with partner Sam Riffice – and Line 5 Singles, Shelton added to the Gator wins in both the quarters and semis.

The Gators will face a strong Baylor team in tomorrow’s championship match.