I Was in the Room With Rafa!

Interviews at the US Open – Luis Mendez 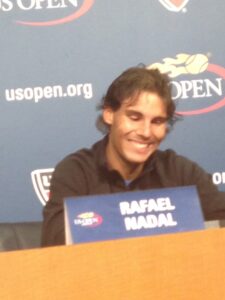 In case you haven’t picked up on this just yet, I am a HUGE fan of Rafael Nadal.  I have been following his career since my son first started playing tennis seriously about 8 years ago, and he is one of those special athletes whose appeal, for me, extends far beyond the confines of a tennis court.

I have had the chance to see him play live several times and never cease to be amazed by the energy he brings to every match. The way he fights on the tennis court has been compared to a gladiator. Rafa himself uses the word “suffer” quite often to describe the experience of competing.

Yesterday, I saw Rafa’s name on the night schedule for Arthur Ashe Stadium and knew I was going to be in for a long day and night of tennis. With my media credential, I am allowed to be in the press room during the player interviews, and I am allowed to ask questions. There was no way I was going to pass up the opportunity to see and hear this young man up close!

I missed the beginning of his match versus the Brazilian, Rogerio Dutra Silva. I suspected it would be a pretty quick match on Rafa’s part, so I stayed in Louis Armstrong Stadium to watch John Isner take on Gael Monfils. Once John was up 2 sets, I decided to head over to Ashe to catch the last set of the Rafa match. On my way over there, I ran into a friend of mine from the Atlanta US Open Series tournament who does stats for IDS. She invited me to come watch with her in the ESPN booth – what a treat that was! We had a birds-eye view of the court from right behind the players – it was incredible!

Once Rafa won, I headed back to the Media Center to gather myself before going into the press conference. When I walked into the room, there were only a couple other media people present, so I parked myself in the center of the front row, right in front of where Rafa would be sitting. He came into the room a few minutes later, all smiles and full of that positive energy he exudes.

The moderator asked for questions in English first, to be followed by questions in Spanish. The first question had to do with his performance during this last match. In typical fashion, Rafa answered very modestly that he started a little bit too slow but played better as the match progressed.

Then it was my turn to ask a question. I asked, “If you could give advice to parents whose children want to be like you (professional tennis players), what would you tell them?” Here is his thoughtful response:

“To be like me or not, that’s something if I did, probably a lot of people can do it because I feel like I am a really normal person. But I think is important to have good people around you. Parents have to be a little bit away and support the kid. But at the end is negative when the parents want to be too much involved on the things. For any reason there is a coach there that knows much more about tennis than the parents. At the end the most important thing is the guy and the kid needs to have a good physical and mental conditions to be ready for the competition and then find a kid that is ready to work.”

Great input from a great champion!

The link below is a recording of part of the press conference – some in English, some in Spanish. I thought y’all might enjoy hearing it. (Just click on the link below to download the audio file then click to open with your computer’s audio player)