Does the Answer Lie in the Big East? 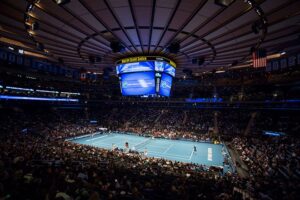 As I reflect on and re-read my last post on the NCAA’s decision to stick with the 2014 scoring and format this year, I keep trying to figure out what we can do, besides bastardizing the scoring and cutting out games, to fit college tennis into that 3 1/2 hour tv window. Because, if nothing else, at least we now know that’s the thought process behind all these scoring “experiments” over the past couple of years.

I’ve heard all sorts of interesting suggestions – from playing singles and doubles simultaneously to playing the doubles an hour before the tv broadcast begins to televising only the top 3 courts – some more viable and productive than others.

One Fellow Tennis Parent called me on Friday and said I should watch the ESPN 30 for 30 film on the creation of the Big East Conference – Requiem for the Big East. I took his advice. The film is available on Netflix right now for those of you who would like to see it.

As a brief synopsis, let me just say this documentary addresses the challenges faced by the basketball programs at some smaller, lesser-known colleges along the East Coast, the birth of ESPN as a television network, and the forward-thinking coaches who understood ESPN’s need for content to fill air-time as well as their own need to recruit local players to build interest in their programs.

Interestingly, college sports are faced with a very similar scenario in 2015. The Power 5 conferences have created their own tv networks and are hungry for programming to put on the air. As one PA reader commented, the SEC Network is currently airing repeats of 5 women’s basketball games, 2 live women’s games, and its SEC Now show for 9 hours. I would say they are definitely in need of content! (Click here for the PAC-12 network schedule and here for the SEC network schedule to see for yourself.)

Back to that 30 for 30 film . . . the basketball coaches of those independent (i.e. not currently part of another NCAA conference) schools got together and formed the Big East Conference and found a way to differentiate themselves from the basketball programs in the ACC and Big 10. They recognized the gritty nature of their players and capitalized on it, creating a brand for themselves that looked very different than a Duke or a University of Kentucky. They knew that, in order to convince local talented players to choose THEIR schools instead of going off to the larger conferences, they needed a way to showcase their teams in a very public way, so they went to the ESPN headquarters (which happened to be located within driving distance) and pitched the idea of a Big East Championships to be held at Madison Square Garden. What college athlete doesn’t want the chance to play at Madison Square Garden in front of a huge crowd? The rest, as they say, is history.

Why couldn’t college tennis accomplish the same feat? Why couldn’t college tennis create an event like the Big East Championships from the 1980s, hold it in a big arena, sell tv rights and advertising, and generate the excitement and buzz around our sport that it should have? If we have that One Big Event – tennis’s Final Four if you will – maybe that would be enough to grow interest in college tennis at the local level, helping teams become revenue-producing for their universities, leading to the all-important “relevance” the ADs keep talking about. Then we have something tangible to promote . . . The Road to Phoenix, The Road to LA, The Road to Miami . . . We give fans a destination, a place to travel to for a grand event, a place to cheer on their favorite team and have fun doing it. Maybe we tie it into a pro event, like both the US Open and Indian Wells are now doing with their collegiate events. And, if we get the right people talking college tennis on these conference television networks or even The Tennis Channel (I’m thinking Wayne Bryan would be a perfect choice!), have a featured Match of the Week, what could that do for the popularity of our sport? The possibilities are endless!

For those who doubt college tennis can be successfully aired on tv because of its multi-court aspect, I say look at college gymnastics – it has multiple apparatuses going simultaneously, and someone figured out how to make that work for tv. It’s time to think outside the box . . . waaaaaaay outside the box . . . and come up with something viable to save college tennis.

Now it’s your turn to share your ideas. Please answer the poll question below then add your suggestions in the Comments area. Okay, GO!