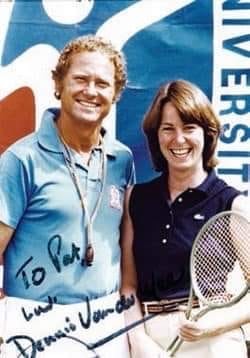 I received the following press release from USTA Southern this morning and wanted to share with y’all ASAP:

The STF, the charitable arm of USTA Southern, awards ten $1,000 scholarships for incoming college freshmen. These scholarships are renewable for three additional years if the recipients do well in college. The foundation also offers financial assistance to worthy individuals and organizations that work to fulfill the mission to promote and develop the growth of tennis.

In 1993, Pat earned the PTR’s Coach Jim Verdieck Award for top coaches and in 2002 she received the International Tennis Hall of Fame’s Tennis and Education Merit Award. Pat has been a USTA Area Training Center Head Coach and was named South Carolina Pro of the Year in 1991. She headed up the Van der Meer Tennis Academy for many years, and remains active in running the Van Der Meer Facilities and programs, including VDM Tennis University, the base for tennis teaching instruction.

The STF also provides grants to junior players ranked in the top 100 in the section and matching grants to the nine USTA state foundations in the section to help lower ranked junior players, support for Southern NJTL chapters, support for the USTA Foundation NJTL Essay contest, and facility grants. The STF’s 2020 funding is expected to range from $150,000 to $200,000.

PTR Foundation President Scott Tharp said, “The PTR Foundation is thrilled to be able to provide these scholarships to so many deserving young men and women whose lives have been positively impacted by the sport of tennis. We believe this is a most fitting way to honor the legacy of Dennis Van der Meer for many years to come.”

Paul Pittman, who chairs the STF’s Major Gifts Committee, added, “I’m proud of this new partnership between our Foundation and the PTR Foundation. It’s great to see two of the nation’s finest tennis organizations team up to provide scholarships that will help young people follow their dreams.”

The scholarships are renewable for the next three years if the student maintains a 3.0 or better GPA, remains a full-time student and does not otherwise receive a full college scholarship. To apply for a scholarship, a prospective high school graduate must be a current resident of a USTA Southern state and an active player who has been ranked in the top 100 or played high school, JTT or NJTL tennis for two years.