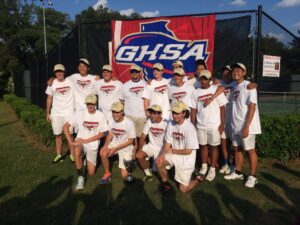 I’m not sure how to begin to describe the events of Saturday’s State High School Championships. I’m still reeling a bit from the stress and excitement and relief – I can only imagine how the 14 boys on the Walton team are feeling!

Rather than give a blow-by-blow of the matches, I want to talk about what went on OFF the court that day.

As I mentioned in previous articles, both our girls and boys made it to the State Finals and were scheduled to play simultaneously on Saturday afternoon. Parents, players, and coaches started to make their way to the site a little before 1pm for check in. We set up tables with food and drinks under a stand of trees then all sat around waiting for the earlier matches to finish so our kids could take the court. The fans started arriving shortly afterward – siblings, grandparents, classmates, and former Walton players were all there to cheer for these players. We had quite a crowd building!

Long-time junior coach Jerry Baskin was among those who came out to watch the matches. Jerry has been an integral part of the Walton High School Tennis program for a very long time. He has coached or currently coaches the majority of the kids on both the boys and girls teams and has always taken an active interest in how the teams perform. When the teams were getting ready to take the courts, Jerry gathered all the parents together and gave a very poignant pre-match speech. He reminded us that this might be the biggest match any of our children had ever played, especially for the Seniors on each team. He reminded us that they might struggle under the pressure and that we should continue to cheer supportively no matter what. He reminded us that we were going to win or lose these championship matches with good sportsmanship, respect for the opponents, and a positive attitude. And he reminded us that this might be the last time we get to see our children compete on a tennis court and that we should enjoy every minute of it.

As the kids went on court to begin their warm-ups with their opponents, the parents and other fans searched out viewing spots with some hint of shade. We had 4 courts which meant our 1 and 2 singles and our 1 and 2 doubles would play first. Once the first match finished, the 3 singles would begin. Things started very well for Walton with both doubles matches going our way in straight sets and a one-set lead for our 1 singles (my son) and a one-set deficit for our 2 singles. My son looked to have his match under control, taking a quick 4-0 lead in the second set before his opponent mounted an incredible comeback to take the set 7-5 and force a 3rd. Our 2 singles player mounted a comeback of his own, also splitting sets and going to a third. Meanwhile, our 3 singles player won a very tight first set and was neck and neck in the second. At this point, I had visions of my son closing out his match, clinching the Championship for Walton, and ending his high school tennis career on a very high note.

Those were MY visions but they aren’t what came to pass. Instead, my son’s opponent kept him on the ropes early in the 3rd set and wound up winning the match, putting Northview on the scoreboard. The 2 singles also went to Northview, and now the teams were tied at 2-2. Once again, things were coming down to our 3 singles player.

Everyone crowded around the court, fans of each team loudly cheering on their player. Both players held serve and got to 6-6 in the 2nd set before our player took a big lead in the tiebreaker, finally clinching the match for the Raiders.

That’s how our boys won the first State Championship since 2002 for Walton but it’s not what makes our boys Champions.

What makes them Champions is how they conducted themselves as players and as teammates that day.

Even though our 1 and 2 singles players were unable to close out their matches, they set their personal feelings of disappointment aside to support and cheer on their fellow Raider at line 3, knowing that a team victory would far outweigh their personal defeat. For the boys who weren’t in the lineup that day, they stood by their teammates who were battling on the court and showed their support hour after hour, in the face of both the wins and the losses. And, when Coach Evans came on the court with the Championship Trophy, all the boys shouted for him to give it to Francis, our Line 3 Singles player, to hold in the team photos. They knew Francis had pulled off an amazing win, and they wanted to be sure Francis felt the full appreciation from his teammates. 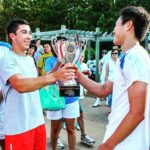 Then the social media explosion began. Each Raider player – both the boys and the girls – were posting messages and photos to Twitter and Instagram thanking all those who drove an hour or more to support them in the heat and congratulating each other on their mutual accomplishment. It’s the first time since 2002 that one school has swept the Boys and Girls State Championship in the largest (6A) high school division in Georgia. I even saw Instagram comments between my son and his opponent complimenting each other’s play that day. There was nothing disparaging or insulting – only positive messages from the players on both teams. It was refreshing and encouraging to see.

After the match, we celebrated with the boys at our Team Banquet hosted by one of the families in their home. Coach Evans presented each player with his Varsity Letter and a team photo then spoke about how much it meant to him to win the State Championship.

He shared that he has been a high school coach for over 10 years, that his father coached over 30 years, and this was the first State Championship either of them had earned. He went on to talk about all the hard work and sacrifices that go into winning at this level

and thanking the players and parents for their willingness to make this happen. We could all tell how proud he was of this group of young men.

And so, with that, another chapter in my son’s Tennis Journey comes to an end. High school tennis is finished. He is playing 3 more junior tournaments over the next few weeks, and then that, too, will be finished. There is still a lot to look forward to, but I think my son will savor this latest accomplishment for quite a while. Earning the title “Champion” alongside such an outstanding group of young men is pretty special.