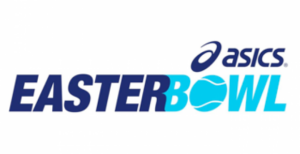 The article below was written by Steve Pratt and originally posted on the USTA Southern California website. I will be at the Easter Bowl today through Thursday and would love to connect with any of you who are there. Please look for me – I’ll be wearing my ParentingAces shirt – so we can chat (and take a selfie)! Also, be sure to follow @ParentingAces on Twitter for some fun photo and interview opps at the Indian Wells Tennis Garden.

The future of American tennis will once again be on display when the iconic 48th annual ASICS Easter Bowl starts on Saturday and will be played at the Indian Wells Tennis Garden, site of the recently completed BNP Paribas Open.

The top-seeded 18-and-under American boys’ and girls’ players are both ranked in the top 6 of the latest International Tennis Federation world junior rankings. Current No. 4-ranked Taylor Fritz, 17, leads a strong group of top American boys, while Puerto Rico’s Usue Arconada, 16, is No. 6 in the world and trains at the Junior Tennis Champions Center in College Park, Md.

The 18s is an ITF Grade B1 and USTA Level 1 event. It is a closed event meaning only players from the United States are eligible to play. For the second year in a row, the tournament will include the nation’s top 12-and-under 14s, 16s and 18s players. The 12s and 14s will start play this Saturday, April 4, with the finals taking place on Wednesday, April 8. The 16s and 18s begin play on Monday, with the 16s finals on Friday, April 10, and the 18s finals on Sunday, April 12.

“Taylor is definitely one to watch. The USTA is hoping he can be one of the next great American players,” said tournament chairman Lornie Kuhle. “He’s got the size and the pedigree. He just need some experience and some seasoning and he has the potential to be a really good pro.”

Fritz, who resides in Rancho Santa Fe, Calif., is the son of former longtime head tennis coach at College of the Desert in the 1990s and 2000s, Guy Fritz.  Fritz’s mother Kathy May Fritz was a former WTA top 10 player and made the quarterfinals at three Grand Slams: once at the US Open in 1978 and twice at the French Open (1977 and 1978).

Taylor is the nephew of longtime popular Coachella Valley teaching pro Harry Fritz and has spent much of his time training in the Desert. He was recently selected in the first round of the Mylan World TeamTennis draft by his hometown San Diego Aviators.

Also to watch in the boys’ 18s is world-ranked No. 17 William Blumberg, No. 38 Ulises Blanch and No. 48 Nathan Ponwith. Hall of Famer Tracy Austin’s son Brandon Holt will also play in the 18s, as will former 14s ASICS Easter Bowl champion Connor Hance and last year’s 16s champ John McNally.

Besides Arconada, Sonya Kenin (No. 22), Raveena Kingsley (No. 28) and Michaela Gordon (No. 29) will be among the top-seeded players, as will last year’s finalist Katie Swan (No. 13), who was the runner-up at the year’s first junior grand slam the Australian Open in January. Fourteen-year-old Claire Liu is coming off her first ITF Futures $10,000 tournament victory, the first player born in the 2000s to win a pro title. In October, Kingsley left the Junior Tennis Champions Center in Maryland to train full-time with former ATP pro and ASICS Easter Bowl sponsor Taylor Dent.

The featured event of the ASICS Easter Bowl this year will be the TEAM USA COACHES RECEPTION and Easter Bowl Player Party presented by the USTA, honoring some of the best coaches in the history of the game. Among the honorees this year will be Jimmy Evert, father of Chris Evert. The event will be hosted by Patrick McEnroe. The event will be catered by The Old Spaghetti Factory in Rancho Mirage on Monday, April 6, from 5:30 p.m. to 7:30 p.m.

The iconic junior tournament started by Seena Hamilton in 1968 and now led by Tournament Chairman Kuhle. Long considered the Super Bowl of junior tennis, the ASICS Easter Bowl’s status has now been raised to a new level by being played at what is arguably the finest tennis facility in the world, the Indian Wells Tennis Garden.

No other junior tennis tournament in the United States possesses the same rich history as the ASICS Easter Bowl.  The tournament was started in New York City by Hamilton and has been played in Florida, Arizona and California.

To keep up with all the ASICS Easter Bowl news, visit the website at www.easterbowl.com and check out the tournament on Facebook (www.facebook.com/EasterBowl) and Twitter (@easterbowl). For more information on ASICS, check out: www.ASICSAmerica.com and follow on Twitter @ASICSAmerica. Use the hashtag #asicseasterbowl.

Editor’s Note: The correct Twitter handle for the Easter Bowl is @AsicsEasterBowl.