It was an interesting day, that’s for sure, and it lasted well into Wednesday thanks to a scorcher of a match between Dominic Thiem of Austria and Rafa Nadal of Spain. But more on that in a bit . . .

I arrived on the grounds at about 10:30am, picked up the day’s schedule of play and noted the matches I wanted to see, then headed out to Court 7 for some Boys Doubles. On Sunday, while watching another junior match, I struck up a conversation with the Court Monitor. It turns out his grandchild is a tennis player who seems to be showing some promise. He told me there were two people sitting in the stands I should speak with – they both coach his grandchild. It turns out the coaches are Tony Huber and Ahsha Rolle, and they graciously agreed to an interview:

Today, that same Court Monitor was on duty, so he and I had a conversation about the role of the grandparent in junior tennis development:

My apologies for the poor lighting, but it was hot as blazes out there, and we sought out the only little square of shade we could find!

Speaking of the temperature, just after 1pm, the tournament issued a suspension of play in all junior matches due to extreme heat. As far as anyone can tell me, this is a first! Yes, it was brutally hot out there, and yes, my clothes were soaked through due to sweat after about 5 minutes outside, but was it any hotter than the Georgia Closed in Macon the end of May? I don’t think so. And in Macon the kids play 2 rounds of singles and 2 rounds of doubles each day unlike here where they only play 1 round per day. That said, as I tweeted after being asked the question: 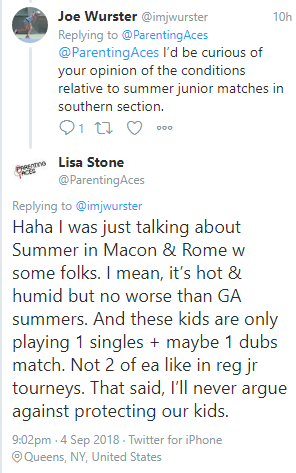 So, during the delay in Juniors action, I caught the tail-end of the Del Potro-Isner match then grabbed lunch and cooled off in the Media Center, watching the other Main Draw matches via the monitors. Around 3:45, the Juniors went back on court to warm up and continue their matches. It made for a very long afternoon/evening with so many singles and doubles matches on the schedule.

Once I had seen all the matches I had noted, I decided to treat myself to a little Main Draw Action on Arthur Ashe Stadium. As you may know, both Serena Williams and Rafa Nadal were on the docket for the Night Session. Since I’m only here two more days, I figured I could handle a late night! Serena made pretty quick work of Karolina Pliskova, the 8 seed, winning 6-4 6-3 in just under 90 minutes. Rafa, however, decided to go the distance with Dominic Thiem, the 9 seed.

I was lucky enough to sit next to my friend, Joel Drucker, a prolific and insightful tennis writer who is on assignment with Tennis.com during the Open. We had some very fun conversation between points and during the changeovers, with Joel asking me questions that caused my brain muscles to stretch quite a bit! After a very quick 6-0 first set with Thiem dominating play, Rafa seemed to settle in, and we knew we were in for a long night. With Rafa leading 2 sets to 1 and up in the 4th, and given that it was after midnight (!), I decided to head back to the hotel. However, thanks to the US Open App and its livestreaming feature, I could continue to watch the match during the shuttle ride to the City then watch the conclusion from my room. Needless to say, with a record-setting duration of 4 hours and 48 minutes, it was well after 2am when the match concluded and I was finally able to fall asleep!

For more on the Junior results, read the latest ZooTennis article here.