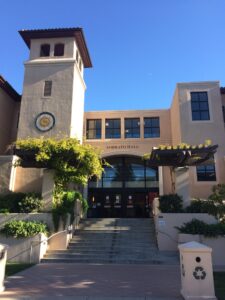 I know, I know. I am totally delinquent in writing about my son’s college move-in and his first few weeks at Santa Clara. As I mentioned in a previous post, things have been pretty hectic around here, so I hope you’ll forgive me.

We left Atlanta early on the morning of September 18th to fly to San Jose after a late night of last-minute organizing and packing. My son managed to get all of his clothes and other necessities into 2 suitcases and his tennis bag – we had ordered most of his dorm needs online and had them shipped directly to Santa Clara. Thankfully, most of the colleges now post lists with Bed Bath & Beyond of what you must, can, and cannot bring to school, so that made the shopping part of the process a bit less stressful. Not stress-free, mind you. Simply less awful than it might have been without that list.

We arrived at the San Jose Airport around lunchtime on Friday, retrieved all of our luggage and our rental car (which we switched to a small SUV last-minute once we realized there was no way all our stuff would fit into a regular car), grabbed burgers at In-n-Out, unloaded our luggage at our hotel, then headed to campus to pick up the numerous boxes from BB&B and Target (which, by the way, completely filled up the rental car!). Afterward, my son wanted to show my husband around the campus, so we walked over to the tennis courts, the gym, his dorm, and the buildings where each of his classes would be held. The weather was perfect, and we had a great afternoon.

The next morning, we loaded up the rental car and headed over to campus for move-in. Santa Clara really has this process down to a science! We were met in the parking structure by a team of Upper Classmen with huge wheeled bins who unloaded our car then met us at my son’s room with all his stuff. What a great system – no sore backs for Mom and Dad!

My son is living in a 6-person suite with 4 single rooms and one double. My son is in the double with one of his teammates, Jeffrey. Another teammate, Kamran, is in a single, then there are 3 non-athletes occupying the remaining singles. The other 3 freshmen tennis players are on another floor in the same Residential Learning Community (fancy term for “dorm”) with a similar set-up.

I’m pretty sure I’ve written before about my son’s tendencies toward neatness and organization. Trying to apply those tendencies to a dorm room is challenging, let me tell you! I assured him we wouldn’t leave until he was completely unpacked and organized, even if that meant another trip to Target and BB&B (which it did!). I think having scheduled dorm meetings that afternoon helped speed things along, and it gave us all a much-needed break from the unpacking (and each other), but we did finally find a space for everything and eventually got him to a place where he started to feel at home in his room.

After the dorm meetings, a few of the players had planned to get in a hitting session.

I told my husband I really wanted to stick around for that since I hadn’t yet had a chance to see our son hit on the Santa Clara courts. I sat with Kamran’s parents and watched our boys as they did some drills, hit some serves, and played some points.

I think y’all know me well enough by now to know how emotional that was for me. My son had been dreaming about playing college tennis since he was 9 years old, and here he was on the courts of his school with his teammates! I was beaming with pride as my eyes welled with tears of happiness and, yes, sadness over leaving my son so far away from home.

When the boys were done hitting, it was time to say our good-byes. They had another meeting to get to, and my husband and I needed to get on the road toward the first stop of our anniversary trip. The good-bye itself was surprisingly uneventful though the hugs may have been a bit longer and tighter than usual. It

had been a pretty stressful day, and I think we were all ready to put it behind us.

Things went pretty smoothly on both fronts. Santa Clara has a new Assistant Coach this year, Niall Angus, and I think the guys were all pretty excited to get to know him. He’s a former college player himself and brings a lot of knowledge and experience to the team.

Class-wise, my son did wind up having to switch one and drop one, but he handled it, survived his mid-term exams, and is doing great so far.

Training-wise, the team is keeping busy. They have fitness every morning then a 2-hour drill session plus private lessons once or twice a week. They play practice matches against each other on a regular basis, too.

And, socially, my son is doing great. He has really bonded with his teammates and has become friends with several other students as well. He and Jeffrey even cooked dinner for a group of them one night in the communal kitchen in their RLC!

The key words here are “he” and “handled” – he called to discuss both matters but only after he had figured out on his own how to deal with them. He didn’t call asking me to do it for him but rather to inform me of the actions he was planning to take. He took the initiative, found the appropriate solution, and kept me in the loop along the way. Another example of life skills he has learned from his junior tennis journey.

Coach Derek Mills had told my son that he didn’t take the team to many tournaments in the Fall due to the fact that Santa Clara is on the quarter system and has a late start date. He took all 6 freshmen to their first tournament at UC Davis earlier this month where they had pretty good results overall. He also took one of the freshmen and the senior to the ITA Regionals this past week. But, that’s it for Fall competition other than an exhibition this weekend versus some SCU Tennis alums.

So, overall, things are off to a solid start for my son at Santa Clara University. My husband and I are embracing our empty nest and keeping ourselves busy with our impending move. All three of our kids will be home for Thanksgiving, an unexpected gift for sure. Then Final Exams are right around the corner for my son as he completes his first quarter before Winter Break.

I’m hoping to get out to the West Coast several times once the Dual Match Season gets underway in January, and I look forward to reporting back to y’all on how my son and his teammates are doing. Go Broncos!