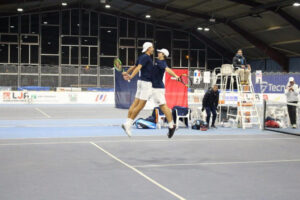 Each year, for the past 8 years, Boise State Men’s Tennis Head Coach Greg Patton has taken a team of top-ranked college men and women to France to compete in the BNP Paribas Master’U. In those 8 years, Patton has coached the US team to 7 victories. Patton and his co-coach, Melissa Schaub of Ohio State, are hoping to bring home the Big Trophy again in 2017. Click here to follow livescoring. Read below for Patton’s account of Day 5!

We have all heard that Heaven is for eternity! Well, in that case Heaven on Earth is here in Lille, France for the site of the Master’s U BNP Paribas Tennis Championships (International Collegiate Team Championships).

Obviously the tennis is world class and seeing such incredible tennis talent fighting to reach every sizzling shot is sheer Heaven. But, in some ways the long days here seem like an Eternity (in Tennis Heaven). I left my room at 7am this morning and have just returned to my room at 9:30pm. The entire time was watching and coaching our team through “the Longest Days Ever”. I rejoice in these days, for although long, they are full of spine tingling thrills.

USA defeated Germany 4-2 today to advance to our 9th straight Finals here at the Master’s U.
We must be living in Heaven, for miracles rain off our rackets in multitudes.

Our seven matches are held on one court with singles leading the order of matches (thus we play back to back matches on one court till the match is decided).

All six players are Hero of the Day . The composure of Alfredo Perez and Martin Redlicki in their T-breakers to clinch their singles victories.

The incredible Men’s and Women’s Doubles matches in which both our teams reached the level of Nirvana heights.

The team Match Clinching doubles victory of Brandon Holt and Martin Redlicki over the Germans was doubles playing at the professional level by both teams. Redlicki and Holt had the entire crowd of spectators, officials, the other teams and their teammates spellbound to witness the utter radiance of doubles play at a level which was exhilarating and seemingly impossible to match. The attached chest bump of Redlicki and Holt says it all!

Tomorrow we play a great Great Britain team (no pun intended). We have won the World Championships for seven out of the past eight years. Our titles for World Team Tennis.

I can’t express enough how close and supportive our team has become during the intense few days that we have been fighting for our tennis life here in Lille.

No greater feeling and honor to play for teammates who become brothers and sisters. The matches are a crescendo of cheers, claps and songs expressing support for the teams. (I think our American team a few years ago were the players and coaches who started the tradition of huddling up and singing songs to motivate their teammates.)

Well, I have to keep it short, for tomorrow is our championship run and I want to get some sleep before the battles begin when USA will play Great Britain for the International Title. We are now going for our 8th straight championship. This isn’t an easy chore for many of the teams are laden with ATP and WTA players.