How To Use UTR – And Not Be Used By It 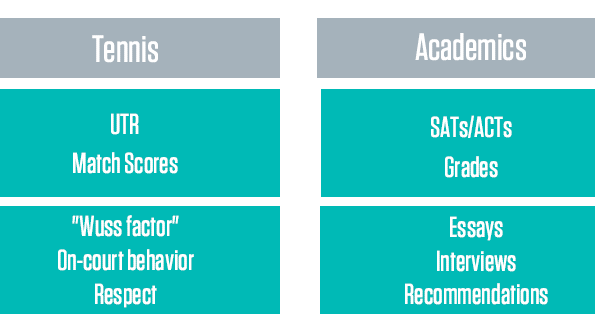 Dave Fish, former Harvard Men’s Tennis Coach (1976 – 2018) & ITA Hall of Famer, gives advice on how to use your UTR and how not to let it use you! Reprinted with permission from UTR.

Let’s be clear: UTR is not a number inscribed in stone predicting your future. It’s an indicator of where your tennis level is at a moment in time. It reflects your 30 most recent matches over the past 12 months, and it will change frequently, both up and down, like the price of a stock, which varies day to day for a thousand reasons.

UTR is an amazing tool for grouping players in events, and it makes for more accurate seedings than rankings based on subjective points awarded on a per round basis. That’s why it has been adopted by so many sections and even national events. UTR-based events yield more close, competitive matches. And, UTR makes it possible for any player, anywhere, to find a level of competition that’s right for them – enough challenge to satisfy, but not too much to overwhelm.

But, if you want to get recruited to play college tennis, UTR is just a piece of the puzzle.

How Do College Coaches Use UTR?

“What’s Your UTR?” College coaches often use this shorthand, as if your UTR was the only factor they consider when recruiting. It’s not. It’s simply a first indicator, just as SATs/ACTs are for your academic fit. It gives them a way of evaluating whether you are a candidate to consider.

College admissions know that SAT/ACT scores will vary, often based on socio-economic or cultural reasons, just as coaches know that players from different backgrounds and competitive environments, sometimes with lower UTRs, will often improve dramatically. However, if someone had SATs of 1000 as a senior, they would not be competitive for a spot at Harvard, and I would steer them elsewhere. I would do the same with a player with a UTR of 7.0 if the starting lineup was in the UTR range of 10-13.

Once we know whether the candidate is in the “ballpark,” then a coach’s work really begins…how do I determine if this player would be the right fit for my team and school?

In addition to SATs and grades, why do colleges also require essays, recommendations and often interviews? Why do they research you on social media? They are looking for a fuller picture of who you are, and whether you are the right fit for their school.

Similarly, college coaches look at your UTR, but also carefully review your entire record, including withdrawals/retired. Coaches asked UTR to display this additional information, which they only half-jokingly named the “Wuss Factor,” to show which players are gamers, hiders, not willing to put it on the line. The Merriam-Webster dictionary defines a “wuss” as “a weak, cowardly, or ineffectual person: wimp.” UTR now displays this for every player, as a data point, without judgment. The occasional retirement for injury is to be expected, but…you get the idea!

Past behavior is the best predictor of future behavior

College coaches look for patterns of behavior. They know their players will often have to face challenges from lower-ranked players in “must win” situations. Coaches want to recruit players who are tough enough to handle these situations and not fold. Roger, Rafa, Novak, and Serena have a target on their backs every time they walk out onto the court…they are always playing “down”. They can handle these pressures now because, and only because, they learned how to handle pressure (which at the time seemed enormous) when they were younger.

How else do I evaluate “character”?

I watch whether a player interrupts his parents in conversations, whether he lets his parents carry his racquets (especially after a tough loss (guess what Rafa does…)). How does he deal with line disputes with his opponent, how does he treat umpires and ball kids? These are clues as to how he will deal with his teammates, opposing coaches and umpires…and how he will interact with us, his college coaches. Four years can be a long time…

I look for a player who would make his teammates better with his attitude, his work ethic, his ability to put his team ahead of himself. In short, not the best player, but the right player, whose presence would strengthen our team culture every day. Would you be a good representative of my university, an alumnus I would be proud to introduce to other graduates when I help you apply to graduate school or find a job?

The Role of Parents

We watch how parents deal with their kids…do they encourage them to meet challenges head on, to get stronger through struggle, or are they “snowplow” parents, anxious to clear away every obstacle/challenge? Red flag…much more than his UTR!

Parents who aren’t familiar with the process of developing a player hear something from another parent, and all of a sudden, they are telling you that you shouldn’t play this kid, or that kid, for fear your UTR will suffer. Wow, really? Good luck with that approach. It will only make you doubt yourself in the future, in more critical situations. College coaches aren’t looking for emotional “cripples” who wilt when they get out into the real world. And, while your parents love you and try to do what’s best for you, it’s very possible that your parents won’t know all of this…you may have to educate them!

Although we would hope that any junior coach worth his salt would encourage players to concentrate on development over ratings, some coaches seem to be more interested in optics, or simply do not know better. Throughout the spring leading up to Roland Garros and Wimbledon, we enjoyed the fantastic play of Canadian Felix Auger-Aliassime, who won his first pro tournament at age 15 and now is one of the brightest newcomers to the game. He exhibits great poise under pressure and handles losses like a veteran. When interviewed on Tennis Channel, he was asked whether all this attention on his rapid rise in the rankings was hard to deal with. His answer was simple…”When I was 14, my coaches told me just to focus on my development and not to worry about my rankings. I’ve never let it worry me since.” Take a page from FAA’s book!

UTR has made it less costly to you when you play a much weaker player. Your match doesn’t count when you play anyone outside 2.0…unless you lose. Ivan Lendl famously recommended that players try to balance their matches: ⅓ of matches against players below you, ⅓ about your level and ⅓ better than you.

How you compete against players closer to your level is a better indicator of your real competitive ability and more reliable data for UTR. So outside of a 2.0 difference, it doesn’t matter how badly you beat someone who is not in your league, as long as you win. If you want to become a great competitor, fuel yourself with the right expectations and attitudes, embracing competition, up and down, as it comes. Then you’ll be the kind of player that any coach would be proud to have.

And to all of those among us who love tennis and support these young players, let’s remember that it takes a village to raise an independent and capable young adult, and it takes more than a high UTR to build a championship human being. Let’s all work together, keeping the long-term interests of these players foremost in our minds. They are the future of this game.