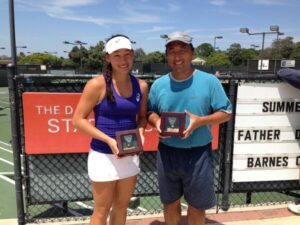 Tonight at 11:59pm Pacific Time is the deadline to enter the USTA National Father/Daughter-Mother/Son Hard Court Championships being held May 8-10 at Springs Country Club in Rancho Mirage, California. Click here for the TennisLink entry page.

The tournament is one of the four USTA Father/Daughter-Mother/Son National (Gold Ball) tournaments held each year: one on hard courts (this one!), one on grass, one on clay, and one indoors. The Father/Daughter category has four divisions: Open, Senior (60+), Super Senior (70+) and Ultra Senior (80+). The Mother/Son offers just one division and it is Open. It is the parent’s age that determines the division for which the team is eligible.

This is the first time the event will be played in the Desert. It has historically been played in San Diego, CA at the Barnes Tennis Center. It is my understanding that Barnes wants to concentrate on Junior events only moving forward.

If you look at the Competitor list on the website you may notice that the majority of teams entered are from California. That makes sense given the location, but it doesn’t mean pairings from other parts of the US shouldn’t play. Having recently played a season of ALTA mixed doubles with my son, I can personally attest to how fun it is to compete with your child!

Some of the teams entered in this year’s tournament are circuit players who will compete in all four of the tournaments. Others are parents and their children making memories.