Familiarize Yourself With the 2017 Junior Competition Changes

Note from Lisa: I am reposting this article with the addition of information on changes to doubles format in national tournaments. Please read this entire article and click on the links to see the USTA documents detailing the changes. Be informed!

A tournament director, a coach, and a Tennis Parent walk into a room . . .

What happens when you get a group of tennis folks together and charge them with coming up with a world-class junior competition structure? Two years and countless meetings later, you get the 2017 USTA Junior Competitive Structure (click here)!

USTA’s Junior Competition Committee is staffed by Bill Mountford and consists of members from a range of tennis backgrounds and involvement. The list includes at least one tennis parent, a couple of long-time tournament directors, several coaches, and others who have a lifetime of experience in the sport. They have worked long and hard to come up with a system of tournaments to meet the needs of junior players of all ages and levels.

It’s crucial that parents (and coaches) understand these changes and what they mean in terms of planning your junior’s training and tournament blocks in the coming year.

One major change that has been a source of debate for many years now is the dilemma juniors face when aging up to the next age group. Prior to January 1, 2017, when a player aged up, all of his/her ranking points in the lower age group just went away. The only way a player could age up AND maintain a ranking in the higher age group was to play up and win matches. Now, though, USTA has made a provision for the lower-age-group ranking points to count at a rate of 20% in the higher age group which should allow players aging up to qualify into higher-level tournaments as soon as they reach the new age division. While some committee members fought for a higher percentage based on what’s allowed in other federations, the 20% seems to be a decent compromise that will take care of most juniors as they move through the various age groups. For more on this new policy, click here. I haven’t been able to find the Points Per Round table for 2017 but will add the link as soon as it is available.

It’s important to understand this new “points counting up” policy in order to fully understand how selection will work for national tournaments moving forward. According to USTA, “the first National Standings Lists of 2017 will look significantly different than the last lists of 2016 because all of the next-younger division players will be appearing on the next-older division lists with 20% of their points. This also means that next-younger division results will be a part of the selection process for all national junior tournaments that use National Standing Lists, including for the first time all USTA National Championships.” The link above shows an example of how the points system will work – I encourage you to do the math for your child(ren) before year-end so you can plan accordingly.

USTA is also introducing additional national tournaments in 2017 to give more juniors the opportunity to play at this high level. These include:

◊ USTA National Indoor Championships, to be held in late November, in support of the vast number of players that play and train indoors during the winter months and in recognition of the prevalence and importance of indoor play. It also will expose players who play less frequently on this surface to one that is widely used in college tennis and provide a college recruiting opportunity just after the mid-November signing deadline when coaches learn whether they have openings in their lineups.

◊ USTA National Spring Championships as a National Level 1 Gold Ball tournament. For many years the “Easter Bowl” has been one of the strongest tournaments on the national schedule, and this designation returns the event to the highest-level national ranking status. The BG18 tournament will continue to be an ITF tournament, governed by ITF Regulations, but the top finishers will receive Gold, Silver, and Bronze Balls.

With the addition of these events, USTA has decided to eliminate the Level 4 regional tournaments and to replace them with National Level 3 Tournaments that are held on weekends that have no other concurrent national tournaments. The USTA’s reasoning behind eliminating the L4s is explained here: “While concurrent National Selection and Regional Tournaments were intended to give players that could not make it into the National Selection Tournaments an opportunity to earn their way to a higher level, the pathway wasn’t perceived as a reality and introduced one of the most complex aspects of the previous structure – entering multiple tournaments and the Freeze Deadline – the date by which a player must decide whether to remain on the alternate list of the higher-level tournament, or commit to the lower level tournament.”

The 2017 National Junior Tournament Schedule offers more date blocks on which national tournaments are held, particularly National Level 3 Ranking Tournaments. The Committee has concluded that more options for play on the calendar will permit players to choose a schedule of national tournaments that best meets the varying academic demands, work schedules, and Sectional requirements that are different for every player and family. The intent is to provide a menu of options that allows players to make customized decisions about their development. I urge you all to study the new schedule below and make the appropriate choices for your junior. 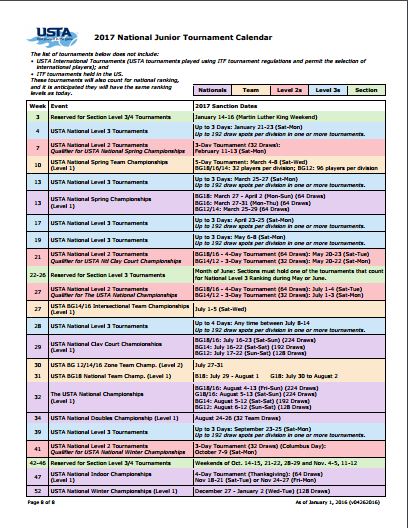 Beginning on Page 3 of the document located here, you can learn about the format, selection criteria, section quotas, and various levels of national tournaments being presented in 2017. Take a close look at the selection process for each level of tournament – they are different, and you need to have a clear understanding of how players will be chosen to participate.

USTA has also taken this opportunity to make some recommendations to Sections on how to create and run junior tournaments. I was most excited to read the last bullet point about educating parents, an issue I’ve been asking – begging! – for since my son started playing tournaments. I’m hopeful the sections will take advantage of the resources available and put on more parent-education events. Let me go on record that they are welcome to use anything I have posted or published on ParentingAces (as long as they ask me first)!

• Commit to fully adopting the alignment principles of the USTA’s Youth Player Progression, entry-level tournaments that are non-elimination and non-ranking and permit non-members to participate, and all aspects of competition (tournaments, USTA Junior Team Tennis, and Play Days) that utilize right-sized equipment, courts and balls.

• Sanction more tournaments, with an emphasis on increasingly localized play at the lower levels in all age divisions.

• Experiment with different tournament formats for younger players and lower level tournaments, including most importantly events that can take place during one day and a half-day periods.

• Experiment with ROG match formats at entry-level Yellow Ball and higher tournaments. • Incorporate and emphasize team competitions, not just in the USTA Junior Team Tennis arena. This includes promotion of participation on Zonals teams, sanctioning inter- and intra-sectional team competitions that model a collegiate dual match and count for rankings, and holding competitions on college campuses.

• With the assistance of USTA Player Development and USTA Youth Play, educate parents and coaches on the pathway, as well as the optimum amount of match play, training, participation in other sports, and rest.

The final change I want to point out is the relocation of several national tournaments. Winter nationals for the boys and girls 16s and 18s will move to the new USTA mega-facility at Lake Nona (FL) beginning in 2017. And rather than splitting the boys 12s and 14s national hardcourts between Texas and Arkansas, they will now both take place in Mobile, AL. There have been rumors about moving other major tournaments to Lake Nona as well, but there have been no official announcements so far other than these.

I know this is a lot to digest, but I really do encourage you to take some time and read through all the information carefully. You might be able to avoid some unnecessary travel and spending if you plan well and mix in some of the new UTR events along the way (click here for their schedule of tournaments). Please remember that this is a journey, one that needs to be mapped out well in order to steer clear of roadblocks. If you have any questions or need clarification on any of these changes, please post them in the Comments below, and I will do my best to address them.

NOTE: There has also been a change to the doubles format used in many national tournaments – they will now be echoing the format used in Division I college tennis matches, one 6-game set using no-ad scoring. This is a change that many predicted when the NCAA and ITA approved the doubles format modification in 2015. I fear this will have a negative impact on doubles development for our juniors. Click here to see the entire document (doubles changes are in Table 2 on Page 6): NtlJrTournRegulations-asof01012017

Editor’s note: Here is a list of the 2017-18 USTA Junior Competition Committee members

Editor’s Note: For those interested, here is a list of the people who served as volunteers on the Junior Competition Committee in 2015-16, the one responsible for creating the current (2017) Junior Competition structure (with their tennis role in parenthesis):