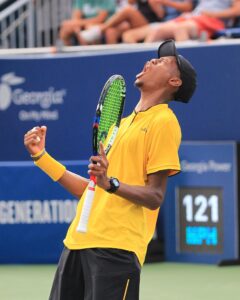 College night even became more special for Georgia Tech rising senior, Chris Eubanks, as he earned his first ATP World Tour main draw win on Tuesday in his hometown of Atlanta. It was a Tuesday evening that seemed like any other, but those at Stadium Court at the BB&T Atlanta Open witnessed what could be the turning point for a local tennis phenom. In the scorching heat of a summer evening, and among an arsenal of Georgia Tech fans and students, Christopher Eubanks notched his first BB&T Atlanta Open Tournament win 7-6(5) 6-4, against American Taylor Fritz, ranked 125 on the ATP Tour and considered one of the top players in the US’s NextGen.

Eubanks, a two-time ACC player of the year and two time All-American is no stranger to success at the college level. He has done nothing but dominate the competition while harnessing his gigantic swing. He has been a force on the college level, and now he has his sights set on the ATP World Tour.

The match between Eubanks and Fritz had the makings of a classic three set marathon. The first set would have both player holding serve to force a decisive tiebreak. Eubanks tightened his play and pulled ahead quickly to a 6-2 lead in the tiebreak. Fritz dug deep but was unable to make up the ground needed as Eubanks took the set 7-6(5). The second set started much like the first as each player held serve. It wasn’t until the fifth game of the second set that Eubanks was able muscle through to take the first break of the match. That was all Eubanks needed to put his foot on the gas and take the set 6-4.

Thursday evening, Eubanks will be back on court. Armed with a powerful service game that can give any one trouble and a massive forehand, Eubanks showed why is he poised to make waves in this year’s tournament as well as in the professional ranks.

Children from the Agape Family Center, 43 in all, participated in the 2017 Hispanic Outreach Clinic at Central Park in Atlantic Station. The event was part of the USTA Net Generation initiative, which encourages youth participation in tennis. Throughout the morning, kids were allowed to play on youth sized courts with local coaches, including Kennesaw State University men’s and women’s head coach, Eduardo Rincon. ATP World Tour player, Ernesto Escobedo also participated.

This was Rincon’s third year working with this event. He enjoys the opportunity to interact with the next generation of tennis. “I feel like tennis has given me so much that I have to somehow give back.”