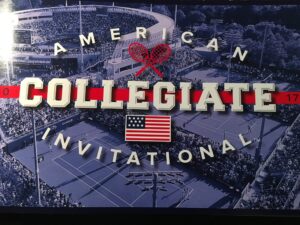 Any opportunity to showcase college tennis is a “win” in my book. The American Collegiate Invitational (ACI), held during the second week of the US Open, is no exception.

The USTA started hosting the ACI in 2014, featuring 8 men and 8 women playing a single-elimination singles tournament with the winner of each draw receiving a wildcard entry into the following year’s US Open Qualifying tournament. If, however, the winner is ranked 120 or better by the US Open entry deadline, then he/she will get a wildcard entry directly into the Main Draw. That’s means a huge payday for these young athletes – the 2017 qualifiers received $8000 just for being in the tournament, $50,000 if they actually made it into the First Round of the Main Draw. ACI winners also get wildcards into three USTA Pro Circuit events, and the runners-up each get one.

It is interesting to note that, although the ACI features college players, this is not an official college event. That means participants are competing as individuals, not as representatives of their schools. That also means that, even though they may receive coaching during their matches, the players’ college coaches cannot be the ones doing the coaching due to NCAA compliance regulations. The strange part is that players wear their college uniforms while competing and are introduced by name and school, but the scoreboard and draw show them as from the US as opposed to their university. For the life of me, I don’t think I’ll ever fully understand all the NCAA rules!

This year’s ACI Tournament Director was none other than recently-resigned USTA’s Director of Junior Tournaments, Bill Mountford. He told me that USTA chose to start this event 4 years ago in order to demonstrate its commitment to college tennis, to celebrate the best players by showcasing them on American tennis’s grandest stage: the US Open. And, to its credit, USTA is fully-invested in these players and this event, treating the collegians like Tennis Royalty by footing the bill for their travel, hotel accommodations at the Grand Hyatt (the official player hotel for the Open), and even taking them out for a gourmet meal the night before starting play. “They should be treated like royalty. They’ve come through Juniors and been among the best players. They’ve spent thousands upon thousands of hours honing their skills. They should be celebrated. It’s got to feel inspiring when they’re out there practicing right next to Rafael Nadal or having their racquets strung right next to Juan Martin Del Potro or being called in the morning by the Bryan Brothers because they need to practice with someone who’s going to hit kick serves to the ad court to warm them up for the day’s match. These are the best of the best of our young American players.”

He went on to say that he hopes the ACI players view this event as an extension of their US Open Juniors experience, bridging the gap between that tournament and the time they will, hopefully, be competing at the Open in the Main Draw. Being on these courts at this venue is a learning experience for them that should aid the transition as they move from college onto the pro tour.

to play in the US Open and then this Invitational has been amazing! I’m so glad I had this opportunity. Hopefully, I can come back here. I definitely do want to play after college. I’m glad I got to have the experience and to know what it’s like and to be around the top pro players is pretty amazing, just to get that atmosphere. Now I know what it’s like and if I get to come back, I can change a few things and know what to expect.” Unfortunately, Brienne will be taking a break from tennis this Fall to have surgery on both her knees. The plan is to rehab and be ready for the dual match season in January.

I had a chance to speak with several of this year’s ACI players, and they all agreed that this event is a wonderful opportunity and certainly welcome the chance to earn a wildcard into next year’s Qualifying or Main Draw, but they view it as one more step in the process. Any time they get to compete on a big stage, it puts them one step closer to their goal of competing at the WTA/ATP level, which most of the players want. As UVA graduate Thai Kwiatkowski said, “If you can’t enjoy playing at the US Open, then you shouldn’t play the game!”

I found it interesting to hear Thai say it hurt more to lose his Main Draw match to Mischa Zverev, mostly due to the loss of ranking points and money that would help him fund his first year on the tour, than it did to lose first round in the ACI to eventual winner Tom Fawcett (Stanford). “I graduated with a Business Degree from UVA, and there’s a massive opportunity cost every day I step out on the tennis court. I’m eventually going to get out into the business world. I think I’m playing right now because I’ve played tennis my whole life, and it’s always been a dream, and I know that if I quit now I’ll always have in the back of my mind that I should’ve played. I’m getting that out of my system and seeing how far it can take me.” He shared that he’s continuing to study and learn while out on the tour because he misses that aspect of being a collegiate student-athlete. Thai went on to say that he’s going to miss everything about college tennis. “Those bus rides and tough matches and celebrations . . . I’m still best friends with all those guys and still talk to them every day, so it’s not too far off.”

I also had a chance to speak with several of the players’ parents, including Scott Holt (Brandon’s dad), Kevin Minor (Brienne’s dad), Beata Redlicki (Michael’s mom), and Carlo DiLorenzo (Francesca’s dad). After seeing all of them back in May at the NCAA Championships, it was great to catch up and get their take on this tournament. They each viewed this event as a wonderful opportunity for their children to play at the Billie Jean King National Tennis Center during the US Open but also realize it’s just another step in their long tennis journey.

And in case you think these college students no longer need that kind of parental support . . . ACI Women’s Champion, Francesca DiLorenzo, had a parent in the stands cheering her on for each match, both in the Women’s Qualifying and the Women’s Doubles Main Draw as well as in this event. “It means a lot to have that support from home,” she shared. And, I have to say my heart nearly melted when I saw Thai Kwiatkowski hug and kiss his dad, Tim, after his first-round loss. What a sweet father-son moment!

Fran is taking the Fall off from Ohio State to pursue her professional tennis career, but, at least as of now, is planning to return to school for the dual match season though she will re-assess in the next couple of months. Some of the new, more restrictive, rules from NCAA are hurting her ability to play enough tournaments in the Fall which was a big factor in her decision to take the next few months off from school. Also, the fact that her major doesn’t allow for as many online classes now that she’s in her Junior year played a role in her decision.

I asked Fran how former UCLA player Jennifer Brady’s success at this year’s US Open impacts her. “It’s always really nice to see a college player do well. It gives us all hope. It’s really good for college tennis and shows that you can do something after college, that it’s not the end of the road like sometimes people think. For her to represent, not just her school but all of college, is unbelievable. It’s really exciting!”

Watching these kids compete was such a treat! I was there the first day of the very first ACI in 2014 but hadn’t been back since. Unfortunately, I had to fly back to Atlanta yesterday before the Men’s ACI Final, but I did see all the other matches this year. College tennis, in case you were wondering, is in great hands!