One of my readers (thank you, whoever you are!) recently posted a comment on another ParentingAces article alerting me to a new blog that was just started by a SoCal parent regarding seeding in an upcoming designated doubles tournament. I read the blog then reached out to the parent, Phil Pellouchoud, who has both a son in the 12s and a daughter in the 16s. Phil shared the details of what seems to be a disconnect between published seeding “rules” and actual seeding. He has reached out to the SCTA (Southern California Tennis Association) asking for an explanation but has been greeted with silence so far. I’m hoping someone at SCTA will see this post and either comment publicly here or reach out to Phil privately to clarify exactly what’s going on in these top-level sectional tournaments. You can read Phil’s blog and reader comments at sctacomplaint.blogspot.com, but he has given me permission to reprint his first two posts. If you live in SoCal and have any information to share, please feel free to add your comments below.

There it is.  I said it.  Yup.  the SCTA is either incompetent or corrupt.  Before you dismiss me or what I just said, please allow me the courtesy to explain myself.  Please read the entire post before passing judgement.

Now any parent of a competitive tennis player knows that playing competitive junior tennis requires an immense amount of commitment from the parents.  I’m not some wealthy guy who can pay to have their coach drive / fly them to tournaments.  I’m just a regular guy, with a regular day job, trying to let my kids compete in the sport they love.  I never played tennis as a youth and to be honest, I don’t really care about tennis – my sport is soccer.  I’m just a regular dad who is trying to support their kids.

When I see an injustice like I am about to explain, it irks me.  Not because it’s that big of a deal in the grand scheme of things, but because I feel like it’s just rotten.  And most importantly, it’s just wrong.  The USTA (and SCTA) are a big monopoly.  There is really no other place to go if your kid wants to play competitive junior tennis in the US.  Yes, there are other leagues, but let’s be real, the USTA / SCTA are a monopoly.  People are probably scared to upset the people there, probably worried about rocking the boat, or retribution — not me.

There are a few big tournaments a year, for which there are big points.  These are called “designated” tournaments – and getting far in them (or even winning them) is prestigious.  It really means something.  One of these tournament is the “71st Annual Fullerton Junior Closed Tournament.”  The doubles draw for boys 12s for this tournament were made as such: 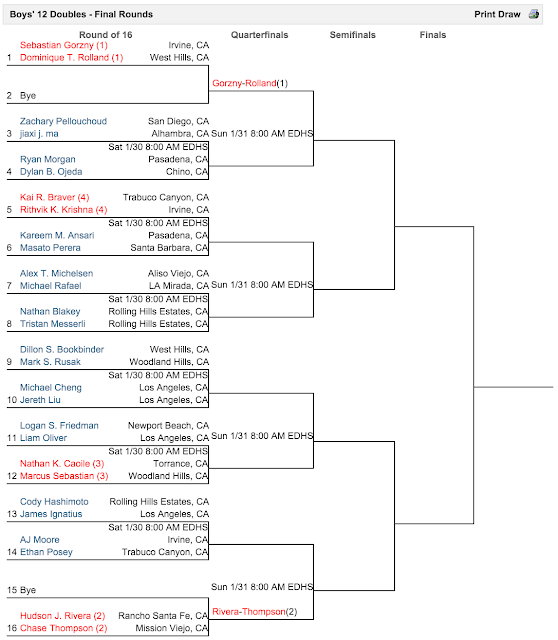 On the number 3 line is my kid, Zachary Pellouchoud (and his doubles partner – Jiaxi Ma).  As you can see, they are unseeded and would wind up facing the #1 seed if they got past their first opponents in the round of 16.  It’s not like I’m scared of the #1 seed, but you will see from the e-mail exchange below, it is simply unfair.

I had so many people text message me about how crazy this was and how it didn’t make any sense and how I should complain to the director.  So, I did (the guy on the CC is the head of the SCTA).

From: Phil Pellouchoud <ppellouchoud@dexcom.com>
Subject: 71st Annual Fullerton Junior Closed Tournament (Level 2)
Date: January 24, 2016 at 8:15:47 PM PST
To: tensmd@aol.com
Cc: TKronemann@scta.usta.com
Hi,
I am trying to understand how the seeding got done for the Boys 12s doubles in this tournament.
I am looking at the doubles ranking for SCTA and I see the following: 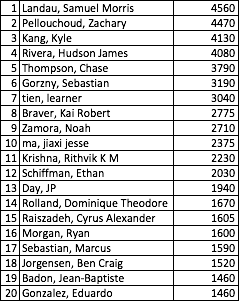 Zachary Pellouchoud and Jiaxi Ma are ranked 2 and 10 respectively yet are unseeded for this tournament.
#1 seed Sebastian Gorzny and Dominique Rolland are ranked 6 and 14 respectively
#2 seed Hudson Rivera and Chase Thompson are ranked 4 and 5 respectively
#3 seed Nathan Caoile and Marcus Sebastian 63 and 17 respectively!!!!!!
#4 seed Kai Braver and Rithvik Krishna are ranked 8 and 11 respectively
What formula is being used to determine the seeding here?  Because I can’t figure out any rational scheme that would have Zachary and Jiaxi unseeded compared to the existing seeds (especially #3).
-phil
I expected that the seeding would be changed.  We’re plenty far from the start of the tournament that no one could legitimately complain they didn’t know the draw had changed and when something is wrong, you should fix it.  I don’t know what kind of math they are using, but I cannot come up with any scheme that would have Zack and Jiaxi unseeded compared to the other seeded pairs.  Sum of doubles rankings, average of doubles rankings, highest ranking, lowest ranking — I just don’t get it.  Maybe they used common core math to come up with the seeding.  I just would like a clear and transparent explanation.
Needless to say – here was the director’s response:
From: David Nowick <tensmd@aol.com>
Subject: Re: 71st Annual Fullerton Junior Closed Tournament (Level 2)
Date: January 25, 2016 at 2:42:55 PM PST
To: ppellouchoud@Dexcom.com
after reviewing with SCTA
seedings will stand as posted
best of luck
dave
I responded to his e-mail asking for what the formula is for determining the seedings – no response yet.
The USTA/SCTA creates a point system whereby they use it for determining seeding (or at least are supposed to).  The ranking (determined by total points accumulated) also determine who gets invited to special events like Team events (e.g. Tommy Tucker), “Zonals” and “National” tournaments.  When the integrity of the system cannot be trusted, when directors and officials start making things up without explanation or act in a prejudiced manner – the people in the system need to speak out, and that’s what I’m doing.

Today is Tuesday, it’s 5:30pm and I see this on the tournament website.

They took down the doubles draws – presumably (hopefully) to remake them based on something that makes sense.  I guess I should feel some small sense of victory, but I guess I will withhold judgement until I see the new draws.  I am going to assume that someone at a high enough level saw the lunacy of what they had and decided in the best interest of the integrity of the organization, decided to fix it.  At least I can only hope for that.

I hope they do fix it, don’t get me wrong.  But some part of me feels like even if they did, there would be unfinished business.  Why did it require an ordinary person to complain two levels above the tournament director, only to be rebuffed twice, having to write this blog and attempting to spread it as far as I could to enact change for something that was clearly wrong?  Something is broken in the process.

I learned some information today about how draws are made, and I thought I’d share that with you here.  I was fairly ignorant to what a director goes through when making the draws.  I assumed you selected all the players in the tournament, clicked on a button, the computer would pick the seeds and randomly place the unseeded players, and voila – you’d be done.  Nope – not quite that simple.

First of all, the director has the ability to “Auto Seed” or “Manual Seed.”  To me, the ability to manually seed players seems inherently bad.  I won’t pretend I understand all the reasons why that’s necessary, but I’ll ignore that for the moment because the people I talked to regarding this tournament told me the director used “Auto Seed.”  Auto Seed to me seems pretty straight forward – automatically generate the seeds.  Again, not quite that simple.

The seeding done by the “Tournament Data Manager (TDM)” (the software used to create a tournament and the draws), pops up a window when a tournament director hits the “Auto Seed” button.  The Auto Seed pop up window contains an entry called “Rank List Type.”  This Rank List Type allows the director to specify what basis they want to use as the method for seeding.  There are a bazillion choices here, I am guessing that section ranking, national ranking, and grandmother’s shoe size are all valid choices. 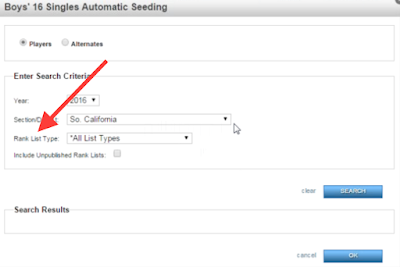 In the interest of full disclosure and transparency, I asked the tournament director what “Rank List Type” they used to create the Boys 12s doubles draw for this tournament, because I would like to see what possible ranking scheme would have not had my son and his partner seeded.  I have not heard back yet.  It seems like most of the e-mail exchanges I’ve had with the USTA officials have been polite while extolling the virtues of transparency and openness.  Yet, every time I ask for specific details regarding how things are done, I get the silent treatment.  It’s frustrating.

I hope someone from the USTA is reading this because I want to speak to you directly here.  I’m one of the good guys.  Go look in your complaint department, I’m willing to bet money that you won’t find a single complaint about me or my two kids who play competitive junior tennis.  That is incredibly unusual for someone with two kids competing at the highest level.

I’m on the front lines here.  I’m the one waking up at 4am to prepare to drive from San Diego to LA for an 8am match.  I’m the one whose driving 12 hours round trip to Tucson over Thanksgiving and New Years.  I’m the one whose spending ungodly amounts of money and time supporting my kids tennis addiction.  I’m that guy.  And I’m not asking for a lot in return.  I don’t want special treatment, I don’t want things I don’t deserve.  I just want to be treated fair, and when I don’t think I’m being treated fair, and I present a reasonable argument, I want someone to look into it.  The dismissive attitude of the people involved is hurting the sport.  The attitude has become one of putting up barriers hoping problems go away instead of deciphering which are the fake problems that can be ignored and which are the real problems which should be addressed.  We’re all in this together, put aside your egos and hurt feelings, and let’s build champions!

26 thoughts on “Is Something Rotten in the State of California?”

This site uses Akismet to reduce spam. Learn how your comment data is processed.

Click here to search the SafeSport Disciplinary Database by name