European-Style Jr Tourney Comes to US with Kriek Cup 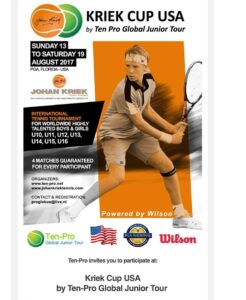 Listen to this week’s podcast here:

Two-time Australian Open Champion, Johan Kriek, has been working hard for the past several years to change how we train junior tennis players here in the US. Last year, he moved his academy from Charlotte, NC down to the PGA National Resort & Spa in Palm Beach Gardens, FL in order to maximize the opportunity for young players to train and learn.

This summer, Johan is partnering with Ten-Pro Global’s Junior Tour to offer the Kriek Cup, an age-group tournament for players age U10 through U16 August 13-19, 2017.

Players can register to compete in their own age group PLUS one age group up to maximize the number of matches played with a minimum of 4 matches guaranteed to each player. On-court coaching is allowed during the set breaks. Johan’s academy is also offering a special training camp the week prior to the tournament to help players adapt to the clay and to the South Florida heat and humidity.

Per the press release from the Johan Kriek Tennis Academy:

All highly talented junior tennis players around the world are invited to participate in the KRIEK CUP USA International Junior Tournament organized by TEN-PRO Global Junior Tour. The tournament which takes place at PGA National Resort & Spa, Palm Beach Gardens, Florida during school vacation, August 13 through 19, 2017 gives the perfect possibility to combine a holiday with World top junior tournament and also promises participants an enjoyable stay at the beautiful and sunny Florida resort. This tournament is part of a very successful series that is being played at the world’s most prestigious tennis academies such as the Rafa Nadal Tennis Academy, Kim Clijsters Academy and the Mouratoglou Tennis Academy. The Johan Kriek Tennis Academy is the first and only academy in the US to host this event.

The tournaments results are counted by UTR (Universal Tennis Rating) and will be played in separate competitions in each age category at the same time (U9), U10, U11, U12, U13, U14, U15, U16. As part of the packages embedded in this great tournament, four matches are guaranteed per person with new coaching on court. Johan Kriek and the Johan Kriek Tennis Academy team will also conduct a Kriek Cup Preparatory Camp right before the tournament. For more information on the camp visit https://www.johankriektennis.com/kriek-cup-tennis-camp

For more information on the Kriek Cup, go to https://www.johankriektennis.com/events/kriek-cup-2017-this-august/